Rising above Pain in our Lives 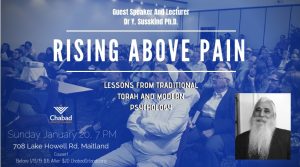 Guest Speaker and lecturer Dr. Y. Susskind, will speak on the subject of Rising above Pain in our lives. Dr. Susskind, is a clinical psychologist with qualifications not only in mental health but in traditional Jewish values as well. He will address and impart lessons from traditional Torah and modern Psychology.

‘Against all Odds’ with Special Guest Rabbi Yosef Mendelovich

Fascinating story of How one Jew stood up to the Soviets and KGB. A heroic story of Faith, Courage and Survival. In 1970, at age 22, already a veteran of the Jewish underground, Yosef Mendelevich made news around the world with a attempt to escape the Soviet Union with a group of Jews on a small tourist aircraft.Before the group could board the plane, the KGB arrested them all, resulting in the infamous Leningrad Trial which riveted international attention. After…