Round one is over, and we are now at the Elite 8 of Passover foods.  I did well in projecting the winners in Round one, let’s see how I can do in a much tougher round 2.

I underestimated the negative power of liver as Gefilte Fish won a tight race.  The deliciousness of Tzimmes and the beautiful presentation was far too much for Cholent to overcome.  As we move to round 2, it’s hard to see Gefilte Fish moving on beyond their first-round upset.  It’s packaged in jelly.  It’s made of multiple fish and can’t even be called a ‘filet o’fish’.  It is still the best way to eat horseradish but I think this is the end of the road for the Gefilte Fish. Tzimmes has the beautiful colors, the sweet delicious taste, and the advantage that it’s not Gefilte Fish and plenty of people may not even know what it is.  That ignorance may hurt it in the future but certainly doesn’t here.

My pick:  Tzimmes in a rout.  I may need to make some this week just because of this bracket and the desire to have something that I can pretend is healthy because it’s got vegetables in it.

Just as I predicted, both moved on.  Both were easy selections in round 1.  I don’t think round 2 will be any more difficult to predict the winner.  Chocolate Matzah is delicious but it’s still both a Passover dessert and made of matzah.  I don’t know people who eat it other than during Passover.  Against a lesser foe it may stand a chance because of the chocolate but it’s facing Brisket, one of the most delicious of all Jewish foods. The smell of a cooking brisket fills a house with joy and children with excitement about dinner in a way that Chocolate Matzah doesn’t.

My pick:  Brisket in another rout.  It’s simple deliciousness.  Brisket is the #1 overall see and it’s going to be hard to see it losing Passover Madness.  It certainly won’t happen against Chocolate Matzah.

Both were also picked to move on from round 1 and didn’t disappoint.  Apple Kugel is good.  It’s even delicious when cooked right.  It’s fruity and sweet and filling.  It’s a solid choice and deserves to be here.  Matzah Ball soup falls in line with Brisket.  It’s delicious.  We eat it all year because it’s so good.  Floaters or Sinkers, it’s still good enough to move on in round two.  Salt, pepper, carrots, celery, some long-simmered chicken with the skin on so we have some homemade schmaltz at the top of the boiling pot of soup.  Have I given away my pick already?

My pick:  If the schmaltz comment didn’t give it away, you need a good Yiddish and Jewish cooking lesson.  Schmaltz almost always means a winner and in this case, it’s a big win.  I know people who don’t like Apple Kugel.  I don’t know anybody (even people who are not Jewish) who don’t enjoy a good bowl of Matzah Ball soup.  Matzah Ball soup rolls over Apple Kugel in a blowout.

I think we finally have a matchup that’s worth analyzing here.  Sweet Matzah Brie is a staple of Passover food.  It’s breakfast, it’s lunch, it’s dinner – whatever you want.  Sometimes people eat it for more than one meal a day during Passover.  The sprinkling of cinnamon and sugar over the hot matzah brie off the stove is always a winner, even if I’m not hungry.  But this is Charoset we are talking about.  Mounds of it go as a side on plates during Passover.  It’s not just part of the Seder, it’s part of the Seder people sneak to eat.  Have you ever seen somebody try to sneak some Karpas during the Seder?  Or just a bite of the roasted egg?  Gotta have that extra dip in the saltwater?  I didn’t think so.  But that spoon digging into the Charoset is a tradition at my Seder table.  That along with the multiple containers of Charoset in the fridge to last well beyond Passover shows the power of Charoset.  This one may be closer than people think.

My pick:  Like in the movie Beetlejuice where if you say his name three times in a row he shows up, it’s Charoset, Charoset, Charoset, and I’m looking for some now.  There is no chance that Charoset, the elusive Passover food that is so good we think we should eat it all year long, but we somehow don’t move on with ease.

After getting 7 of 8 right in round one (That delicious Chopped Liver somehow lost to Gefilte Fish which isn’t even a real fish!) I am more confident in my selections to reach the Final 4.  VOTE VOTE VOTE!!! 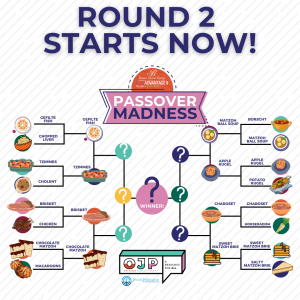