It’s the Final 4!  We’ve been waiting all year to see who gets here and it has been an exciting journey.  Three of the top seeds cruised into the final 4 however it was the exciting run made by Gefilte Fish that captivated everybody.   Expected to be eliminated early, Gefilte fish hung strong, had a huge upset win, and then took Tzimmes into overtime before just losing on a questionable call.  I’m not sure if it was people thinking there was an actual Gefilte Fish swimming in the ocean or the love of something to hold a lot of horseradish, but Gefilte Fish more than surprised in this tournament.

On to the Final 4 and this exciting matchup.

Game One – Brisket vs. Tzimmes

Tzimmes had perhaps the easiest road to the Final Four, facing Cholent in a non-Shabbat category and then the surprising Gefilte Fish.  Their color, pretend healthiness (carrots and raisins but filled with sugar and honey) and sweetness explains their making it to the Final Four, but will it be enough?  It’s a delicious side dish but can a side dish really make it to the Passover food championship?

Brisket was an early favorite to make it to the Final Four and they have delivered.  Many have them as the overall favorite to win the title.  It’s delicious, has a great smell and color, and is filling.  It’s not just A main course, it’s THE main course.  Having already defeated chicken in the first round, I don’t think there is another main course that could possibly compete.

Prediction – Brisket in a rout.  While Tzimmes is delicious and colorful and may even make people feel good because they are eating vegetables and fruit, there is nothing like Brisket.  There is a reason Brisket was the odds-on favorite to win it all and its overall dominance is shown here.  Brisket on to the finals!!

This is the semi-final matchup everybody had circled on their calendar.  Two of the heavyweights.  It could be a championship matchup – they are both that good.

Charoset is the definition of Passover foods.  Apples, nuts, wine (or grape juice) simply seem to go together.  It looks great on the Seder plate.  It’s delicious on Matzo or mixed with horseradish on Matzo.  It’s a side dish all by itself.  It’s simply multi-talented and a true Passover fan favorite.  It’s the one thing that there is always way extra made because everybody always wants more.

Matzo Ball Soup should be a Passover food only but it’s so good that it’s a Shabbat food as well.  And a regular mid-week ‘feel better’ food.  And it’s Jewish Penicillin.  The 5th question during the Seder could very well be ‘One ball or Two?’   The steam coming off the soup, the schmaltz created in cooking it, the veggies, the chicken, the matzo balls, some salt and pepper – what’s not to love.  Early predictions had Matzo Ball soup facing Brisket in the finals but they have to get through a very tough and committed Charoset to get there.

Prediction – Oh boy is this a tough one to call.  I have a feeling this is going to be very close throughout as the love for Charoset is real.  In the end, I think Matzo Ball soup is simply too strong and in those closing hours of the vote, it pulls away for a solid victory and a chance to face Brisket for the ultimate title.  And what a great matchup that will be!! 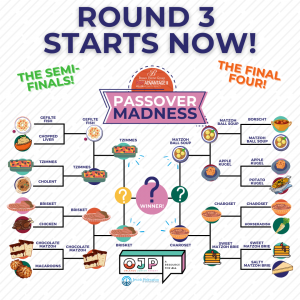