Round One – Passover Madness

In the appetizer face-off, we have the infamous Gefilte Fish against chopped liver.  Growing up, I thought there really was a Gefilte Fish swimming in the ocean and never consider that chopped liver was actually chicken livers that were chopped up.  The way we trick our children with these foods is enough for them both to lose, however since one has to move on, here is the analysis.

Chopped liver is a staple of Eastern European Jewish food (I just can’t write cuisine).  Like fricassee and many other foods that my children would laugh at me for eating while I grew up when my Grandma Esther brought out the chopped liver, it was a signal the feast was on.  You could call it Jewish pate but that’s probably an insult to pate (although I must admit I prefer good chopped liver to pate every single time).   I’ve had bland chopped liver but not bad chopped liver.  It’s very consistent.

Gefilte Fish is the pressboard of all foods.  It’s a hodgepodge of fish pressed together, soaked in a jelly, and then covered with horseradish to hide the taste, and if you use the pink/purple horseradish, to also cover the look.  I love gefilte fish but after years of eating I have come to realize that what I really love is having something to put lots of horseradish on and to burn my tastebuds and clear my sinuses, not really the gefilte fish.

My pick:  Chopped liver moves but it’s closer than people think because many do realize it’s liver and thinks there really is a type of fish in the ocean called ‘Gefilte’.

Tzimmes vs Cholent.  An epic matchup.  I wonder how epic it really would be if we were eating cholent during the week.  On Shabbat, it’s the hot food.  It’s got the cooked meat and hot potatoes and veggies.  Unlike the cold leftover Shabbat dinner food put out or deli meat, there is steam when you open the pot and a fresh smell in the air.  It’s an undefeated Shabbat food (except against freshly baked Challah) but as a mid-week dish?  I’m not sure it holds the imagination the same.  Tzimmes on the other hand is colorful.  It’s tasty.  It’s sweet.  I love tzimmes.  I’ll make tzimmes on the holidays and just as a side for midweek dinner.  It’s consistent, delicious, and holds up every time.

My pick:  Tzimmes but closer than expected because people don’t know what it is (calling it cooked sweet carrot casserole would help) and Cholent has the huge Shabbat edge and love the gets the vote out.

Brisket vs Chicken.  The heavyweight division.  This is a finals matchup, not a first-round matchup.  Who did the seeding for this bracket anyway?  I love them both.  I can eat chicken for dinner every single night and be happy.  If it’s overcooked and dry you just add a little gravy, applesauce, or barbecue sauce and it’s back to delicious.  It’s perhaps the classic Jewish Shabbat dinner week in and week out.  How can it possibly lose?  Because it’s up against Brisket.  The all-time great of Jewish dinner entrees.   Growing up when you heard there was brisket with the chicken for dinner, you wanted to help serve the food to ensure your side of the table got the brisket platter first.  If you ended up with a small piece of brisket and lots of chicken you were disappointed.  The brisket platter was always empty while the chicken platter had half of the food still left on it.

My pick:  It’s not fair to chicken but this is Brisket in a blowout.  Perhaps it’s the regularity of chicken but brisket is simply the elite entrée for any holiday (or on Shabbat).  The cut, the sauce, the messiness on my plate.  It is such a blowout I don’t think I can wait until Passover to have brisket and it is going to be my Shabbat dinner this week.

Chocolate Matzoh against Macaroons.  The dessert matchup.  Chocolate Matzoh is almost good enough to eat all year long.  And if it’s homemade, it certainly is.  Even the store-bought is good enough to consider (but not good enough to select).  This is ripe for an upset though.  Homemade macaroons are amazing.  I’ve made them and they are easy to make and incredibly good.  When those show up on the dessert menu they are very hard to beat.  Maybe impossible.  But those store-bought ones are what usually show up and they simply aren’t that good.  We eat them because it’s Passover.  Sort of like those Passover sandwich rolls my mom and grandmothers used to make.  We ate them because it’s Passover and they sort of looked like rolls.  But they aren’t and once I realized all they did was sit in my stomach longer than regular matzoh did, I was done with them.  Because the likelihood of the store-bought macaroons showing up instead of the homemade ones, it is hard to depend on macaroons.

My pick:  If I had any faith it would be the homemade macaroons, they would pull the upset over chocolate matzoh.  But those store-bought ones are everywhere and what usually shows up.  Dessert for Passover seems to be disappointing unless you find the recipes to bake yourself.  Since we are likely looking at both being store-bought, I have to go with the chocolate matzoh and don’t think it will be close as most people have only eaten the Manischewitz or Streits versions and well, even with a glass of milk they aren’t good.

My grandfather ate/drank borscht.  The look and smell of it still turns my stomach.  I love my grandfathers and they were a key part of my life growing up – this is one of the worst memories I have:  Them forcing me to have some of their borscht.  Cold beet juice with sour cream on top curdles my stomach to this date.  Having said that, there is a resurgence in the younger Jewish community around borscht.  I think there is something cool about drinking a beet smoothie that has a very Jewish name and comes from the old country.  Personally, I’d rather eat gefilte fish with no horseradish (and you know from above that I believe the entire purpose of gefilte fish is something to put lots of horseradish on) however if the young vote comes out, Borscht could be very dangerous.   Matzoh Ball soup, on the other hand, is something I love to cook.  I have my own secret recipe (I have adjusted it for years and mix it up – sometimes with noodles, sometimes without) and will make it any day of the week.  My secret recipe for Matzoh Balls (ok, it’s not really secret – just cover the pot for 20 minutes and DON’T PEEK) ensures they are floaters- light and fluffy.  I make enough for a family of 25 which means it lasts 2 weeks in my house.  When my kids smell it they can’t wait to eat it and are excited.  It’s THE Passover food that people eat all year long with joy.  It’s so good, it may get overlooked and the hipness of Borscht with the younger generation may keep this close.

Apple Kugel vs. Potato Kugel.  Sweet vs Starch.  One of the toughest matchups to call as both are delicious and very different.   Potato kugel is the standard side for all holidays.  It’s sturdy and delicious.  It’s hard to mess up and adding salt and pepper will usually fix any issues related to being bland.  One of the most solid foods around.  Hard to find any fault with potato kugel and a vote for potato kugel can’t be faulted.  Apple Kugel is sweet and tasty.  It adds flavor to any dish and can even serve as a dessert in a pinch.  It can also be a bit risky as unlike potato kugel, sometimes it’s not good.    This one is a toss-up and gonna be a close one.

My pick:  Apple Kugel is a stunner.  Personally, I’d vote for the potato kugel but I think the sweetness of the apples is going to win out here.  I wouldn’t be surprised if it was a blowout as potato kugel is a bit dull, although delicious.  Apple Kugel could pull a few more upsets along the way – they are a sleeper pick to win it all!

Charoset vs. Horseradish.  Charoset is the Miller High Life of Passover foods (for those of you who don’t get the reference, Miller High Life’s ad campaign was ‘The Champagne of Beers’.)   It’s one of the few Passover-only foods that people love to make and love to eat.  It’s fruity, nutty, and has a hint (or more) of wine (or grape juice).  Seems to be a pretty perfect food which begs the question, why only during Passover??  Horseradish is Budweiser (the King of Beers).  It simply rules.  It is what makes gefilte fish edible.  You use it on Prime Rib.  It’s good enough to have on Matzoh without anything else (although most prefer charoset with it).  It’s close to the perfect condiment.

My pick:  I’d like to see Horseradish hold its own but I think this is the biggest blowout of the tournament.  People LOVE Charoset.  Unlike me, who will eat horseradish with a spoon, most people do that with Charoset.  They make a huge side dish of it.  It’s one of the highlights of Passover.  I can see Charoset winning by double digits easily.

Sweet Matzoh Brie vs Salty Matzoh Brie.   Sweet vs. Savory.  Another classic matchup of tastebuds.  The key question here is which do people prefer during Passover – sweet or savory.  Matzoh Brie with the Passover syrup that is only good because it’s Passover is amazing.  You can put jam or jelly on it.  Cover it with fresh fruit.  So many options to add a sweet flavor to your Passover breakfast.  But that salty touch makes your mouth water too.   It makes it more than something just for Passover (until Passover ends when you realize you still have enough Matzoh inside your body to last a month!)  This one could go either way depending on the taste buds of our voters.

My pick:  Like before with the potato kugel vs. apple kugel, I’m going with the sweet choice here.  Passover has plenty of salt in it and the opportunity to add sweetness is a bit too enticing.  In a close one, I think sweet wins out over savory and the Sweet Matzoh Brie moves on to round. 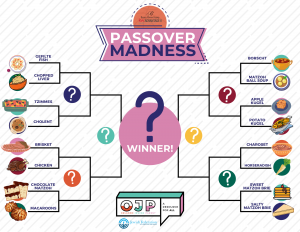