Round Four – The Championship Round – Passover Madness

We have made it to the finals of Passover Madness.  While we had some upsets along the way, it is no surprise who is playing for the championship.  Matzo Ball Soup against Brisket.  Before I get into the analysis of the championship round, here are some thoughts.

I loved how Passover Madness engaged people to discuss Passover food and their favorite dishes and memories.  As I read the comments that went back and forth, I found myself reminiscing about my childhood and the way Passover foods (and Jewish foods in general) bring back so many special memories.  The smell of oil, potatoes, and onions always brings me back to my Grandma Esther’s (z’l) kitchen.  I see her smiling face every time I breathe in those smells and wish she had gotten to meet her great-grandchildren.  When I think of or see Borscht, my stomach no longer gets queasy, I think of my Grandpa Len (z’l) and Grandpa Si (z’l) and how they loved their borscht.  What a treat it was for them even though I never liked it.  It’s almost enough to make me want to try it now (but not really).

When I think of horseradish, I always remember my cousin Eric (z’l) and our massive horseradish eating contests.  Who could get the biggest spoonful in their mouth, eat it, and survive the heat?  When the horseradish at our Seder this year was incredibly hot, I flashed back to him and if this would have been the year he won (we always tied, neither of us could stand losing) because I just couldn’t get a big spoonful down.

I brought my homemade charoset, macaroons, latkes, and Passover cake (new recipe that was easy to make and so delicious – it’ll be shared next year) to my parents’ house during Passover this year, the memories of our big Passover family gatherings flooded back.  The house filled with family and our annual whiffle ball game with my Grandpa Si umpiring and the one year my Grandma Esther pitched.

Passover, and Judaism in general, is about memory.  We remember our exodus from Egypt.  We remember our loved ones and gather together to celebrate what it means to be family and to be part of the Jewish people.  Thank you to everybody who participated in Passover Madness and commented on their favorite foods.  It made this year’s Passover that much more special for me.

Now onto the matchup!!

This is a high-level, difficult matchup.  You have the traditional ‘Jewish Penicillin’ in Matzo Ball Soup against the elite meat, Brisket.

While you can order a brisket sandwich at most BBQ places in town and enjoy it, it’s not Jewish Brisket.  There is a difference.  The sauce, the juiciness (even when slightly overcooked), the excitement of it on the serving plate, and how that serving plate is always empty at the end of the meal while the turkey or chicken serving dish always seems to have plenty of leftovers.  Brisket is high-end Jewish food.  A good cut is expensive and worth it.  It’s a treat.  It’s special.  While there are tons of recipes for Jewish food, it seems every Brisket recipe ends up tasting basically the same.  It’s the winning lottery ticket of Jewish foods.  So how could the winning lottery ticket of Jewish foods ever lose?

Matzo Ball soup presents the challenge.  While Brisket is the lottery ticket of Jewish foods, Matzo Ball soup is the base, the foundation, and the core.  It’s filled with chicken and scraps.  The chicken bones give flavor to the broth and the skin gives us that wonderful schmaltz that ‘sticks to your bones’.  When you aren’t feeling well, it’s Matzo Ball soup that is the go-to.  And unlike Brisket, the matzo balls are different in every house.  Some are floaters.  Some are sinkers.  Some use seltzer and some don’t.  Everybody has their own twist to make their matzo balls special.  While I prefer floaters, when I get sinkers at somebody else’s house, I don’t complain, I eat them and still enjoy them (just not as much).  Matzo Ball soup isn’t just Passover, it’s Shabbat.  It’s Rosh Hashanah.   It’s any special dinner and sometimes it’s just what’s for dinner.

In this epic battle, who comes out on top.  Early in the tournament, I couldn’t see how Brisket could lose.  It’s just so delicious and so special.  It’s not an everyday food which makes it more exciting and more delicious.  It’s a favorite.   But Matzo Ball Soup just keeps on chugging.  It’s comfort.  It’s home.  It’s family.  It’s delicious. 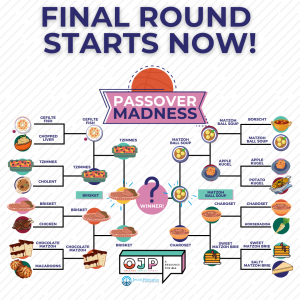