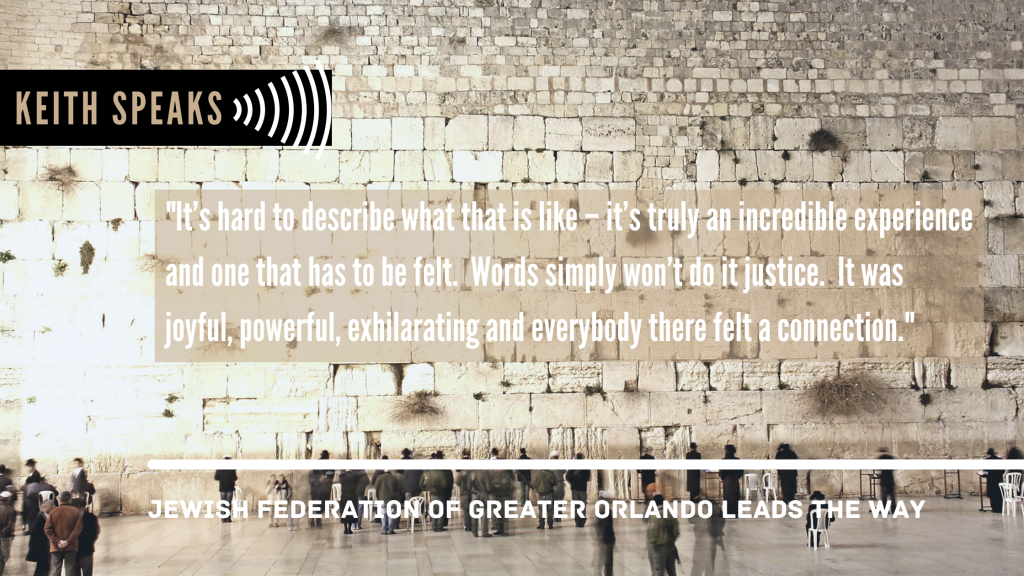 Wow, what a day.  Jerusalem is an amazing place to be and today was long and full.  We began the day by going to Yad Vashem, Israel’s Holocaust Museum.  Yad Vashem means ‘hand and name’.  It’s a place that is all about putting names to the victims of the Holocaust/Shoah and documenting how it happened.  Interestingly, I learned that my childhood Rabbi, the one who was at both my Bar Mitzvah and Confirmation, had a key role in the design.

For those who have been to the Holocaust Museum in DC, I like to say that it makes you think while Yad Vashem makes you feel.  That was very true today.  It’s typically very crowded and today was no exception.  It often feels rushed because there is so much to see and so much to take in.  I’ve probably been there at least 15 times (maybe more) and there are still things I see that I never did before or things I see totally different than before.  Today I found myself wondering if it being so crowded was a good thing or not.  It’s amazing that so many people want to experience it and learn yet I wondered how much more impactful it would be on each visitor if it wasn’t so crowded and they had more time.  I have no answer and it’s something I will ponder.

I was struck today by the power of the Nazi propaganda and how they dehumanized Jews.  Especially in light of Kanye West and Kyrie Irving’s recent antisemitism, I found myself comparing the Nazi propaganda to both what they said and even more to the comments on many posts about them.  The vile statements I read in the comments section of these posts on social media, the hatred for Jews by people who clearly knew nothing but hate Jews anyway was scary.

Today was also Kristallnacht, the 1938 pogrom, also known as the night of broken glass.  I’ve heard my Uncle Ralph talk about that night, as he lived through it.  As a group we talked about how that night was really a bellweather moment for Hitler and the Nazis.  The world knew about it and didn’t really do anything, giving Hitler the room he needed to continue his systemic dehumanization and eventual murder of 6 million Jews.  With the continued rise in antisemitism, we wondered what our Kristallnacht might be and how would the world answer it.

After Yad Vashem, we walked next door to Mount Herzl, the military cemetery.  It is a striking place, filled with beauty and sadness.  We had a chance to visit the grave of Ze’ev Jabotinsky, Theodore Herzl, Golda Meier, Yitzhak Rabin, and other great leaders of Israel.  People who made a big difference.  As we walked through Mount Herzl, the graves are beautiful and built like beds.  It’s a massive cemetery which is breathtakingly beautiful and deeply sad.  I am always incredibly grateful and sad as I walk through.  It’s a place I wish I could spend more time because each one of these graves have a story and I want to learn each one. 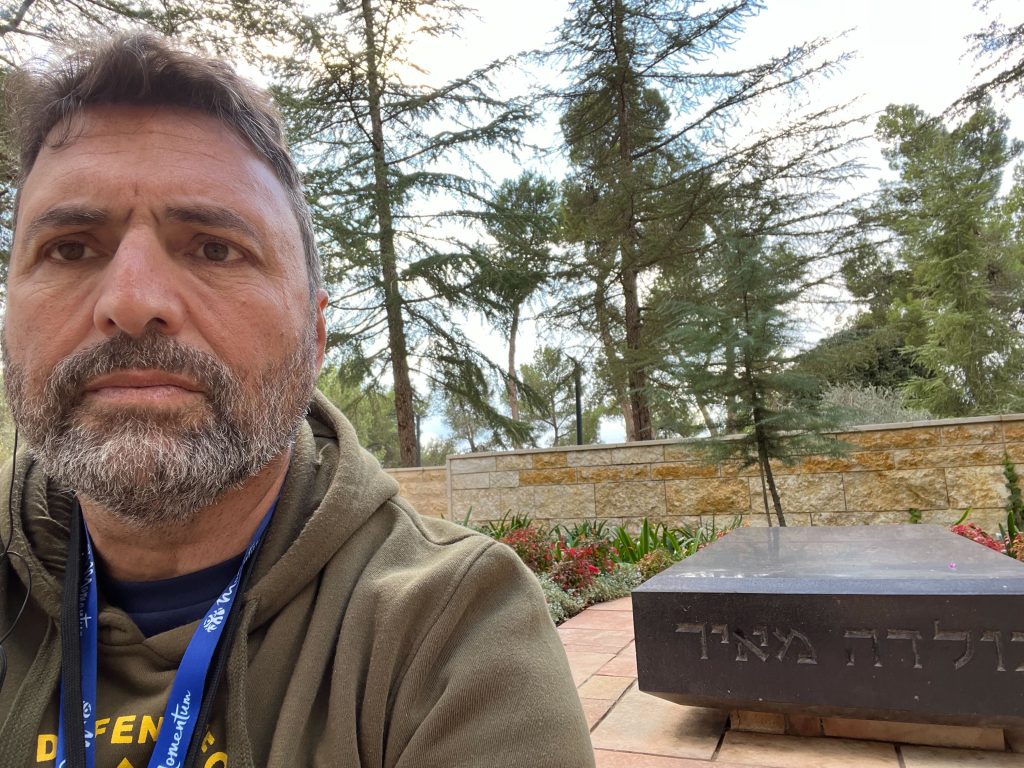 At the grave of Golda Meier.

We left Mount Herzl for the old city of Jerusalem.  I love the old city.  It’s got a special vibe that you can’t really describe.  It’s spiritual and special.  It’s old and new.  It’s timeless and present.  We spent our time in the Jewish Quarter, eating lunch (falafel and schwarma) and then listening to Charlie Harary prepare us to visit the Kotel, the Western Wall.  Charlie is a captivating speaker and talked about how God isn’t in heaven, he’s inside each of us.  We each have a piece of the divine within us, it’s just being open to connect with it.  While I’d heard his talk before visiting the Kotel before, this year it hit much harder.  As Charlie talked about God being our father and always being there with a father’s love, I found myself really thinking about my dad and got incredibly emotional, tears flowing down my face in a room of 160 men and not caring.  I was openly weeping as I missed my dad and wanted to share this with him.  A friend of mine wrapped his arm around me, giving me a hug and just being there.  It was an incredibly powerful and meaningful experience.  Before we headed out to the Kotel, Ari Shabat gave us a special charge – walk in silence the Kotel, appreciate this incredible opportunity, put your hand on the wall and just say ‘Hi Dad’ and open yourself to whatever comes.

I’ve been the Kotel too many times to count and it has a special connection for me.  My ritual is always to lean my forehead against the wall and talk to God.  It’s incredibly meaningful.  This time, I followed Ari’s suggestion and just started with ‘Hi Dad’ and promptly began to cry.  I stood there with my forehead against this 2000+ year old wall, openly crying as I connected not just with God but with my own father.  When I finally was ready, I lifted my head, wiped my tears, and began to walk towards the inside area of the Kotel.  One of our trip members who saw me weeping thought it was because of the power of the Kotel and asked if it was my first time.  I was honest and just told him no, it was because my father just died two months ago.  I thanked him for asking.  In the inside area I joined a service that was going on (there is always a service going on at the Kotel!) and was able to say the mourners Kaddish for my dad at the Kotel.  It was incredibly moving. 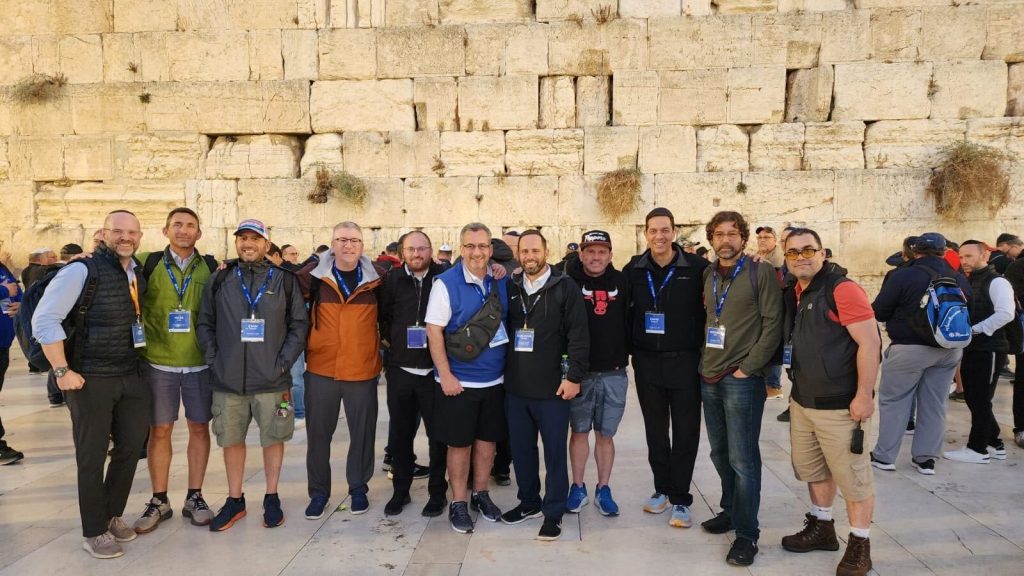 As we walked back into the plaza, a group of IDF navy soldiers came into the Kotel plaza singing and dancing.  It was a jolt of electricity and we joined them.

It’s hard to describe what that is like – it’s truly an incredible experience and one that has to be felt.  Words simply won’t do it justice.  It was joyful, powerful, exhilarating and everybody there felt a connection.

As we wrapped up singing and dancing with the soldiers, my college friend and fraternity brother Al Cohen arrived.  I knew Al was in Israel for a wedding and planned to connect.  Israel is special that way – people from your life sometimes just show up.  It was great to see him and reconnect.

We walked around the old city, getting a tour from our guide, and then sat down at a coffeeshop to talk as a group.  For 90 minutes, the 13 of us had a deep conversation, getting vulnerable with each other and sharing different thoughts.  It was truly the highlight of the trip.  We wrapped up our conversation and headed back to the Kotel to tour the tunnels beneath.  It’s amazing to go underneath the Kotel and see how King Herod actually built it.  There are original Herodian stones, more than 2,000 years old, in pristine condition.  We stood on original streets from more than 2,000 years ago.  There is a place underneath that is the closest we can get to where the ‘holy of holies’ was.  It’s a special spot reserved for women and it was very powerful to see one woman deep in prayer and later on, a group of high school girls come to pray there.  There was also a new synagogue built in the tunnel area that was simply awe inspiring.  The picture I took doesn’t do it justice. 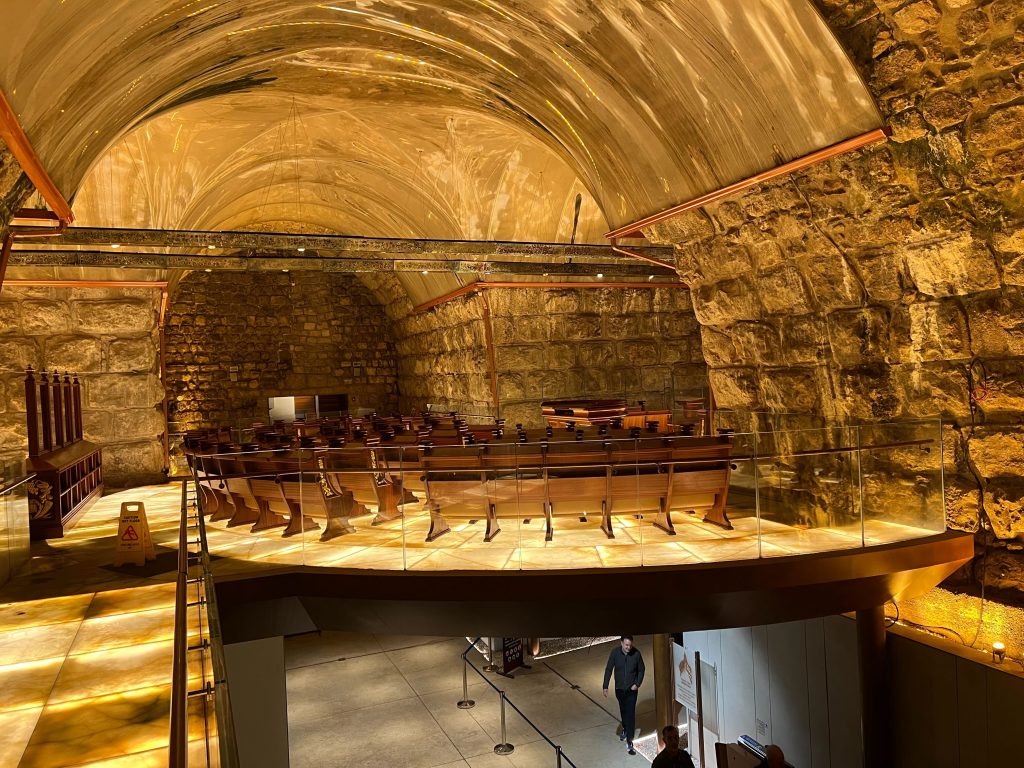 After leaving the tunnels we headed to a late dinner at Chayen, an incredible Asian Fusion restaurant.  The food was delicious and the conversation even better.  We ate, laughed, talked, debated, and had a great time.  Before we knew it, it was 11:30 and we had to walk to the hotel.  The 20 minute walk felt great and was a great end to the day.

Today was a day filled with emotion.  Yad Vashem on Kristallnacht.  Mount Herzl.  The power of the Old City of Jerusalem and the Kotel.  Missing my dad and also connecting with him.  Good friends and great conversation.  Delicious Food.   It’s hard to believe this was all one day, yet this is the essence of Jerusalem.  A truly incredible city.