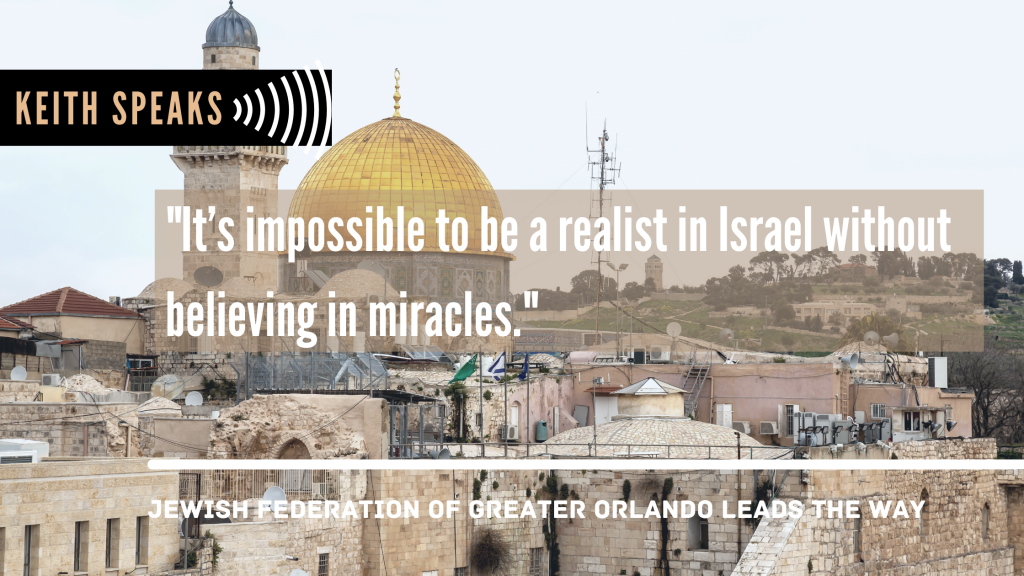 Today was the trip south to Masada and the Dead Sea.  This means it’s a very early morning so we can climb Masada before it gets too hot.  When you enter the Judean desert, the topography changes dramatically and it’s incredibly beautiful.  When the Dead Sea appears, the contrast of the desert and the blue water is incredible.  It’s hard not to just stare. 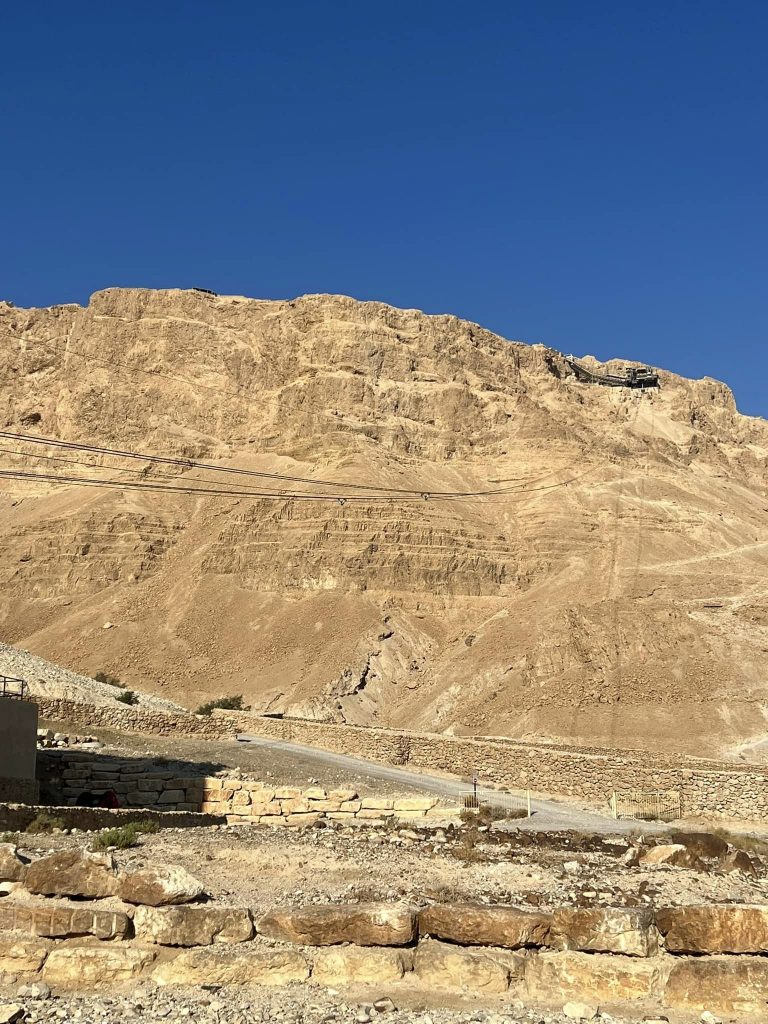 A view of Masada.

When we got to Masada, I decided to take the snake path up.  I’ve had some health issues lately and this probably wasn’t the smartest decision, but I took my time and made it to the top in a record slow pace.  On the walk I got to spend time with friends as we talked and chatted.  Even though it took a long time, I enjoyed the process of getting to the top.  One of the guys on our trip had his Bar Mitzvah in the synagogue on the top of Masada which was incredibly meaningful.  We toured King Herod’s amazing structure, something I’ve done about 15 times.  I always enjoy exploring the steam baths which were ingeniously constructed, and you can still see some of the 2,000-year-old art painted on the walls.  We finished the tour, headed down via cable car, and headed to the Dead Sea.

I love the Dead Sea.  I know for some people it gets old very quickly but it never does for me.  The water is beautiful and there is something about floating the way you do that is just enjoyable.  Add the Dead Sea mud on your skin and the incredible mountain beauty both on the Israeli side and the Jordanian side and it’s captivating.  After being so hot and sweaty from Masada, it was refreshing to float, cool down, and hang out. 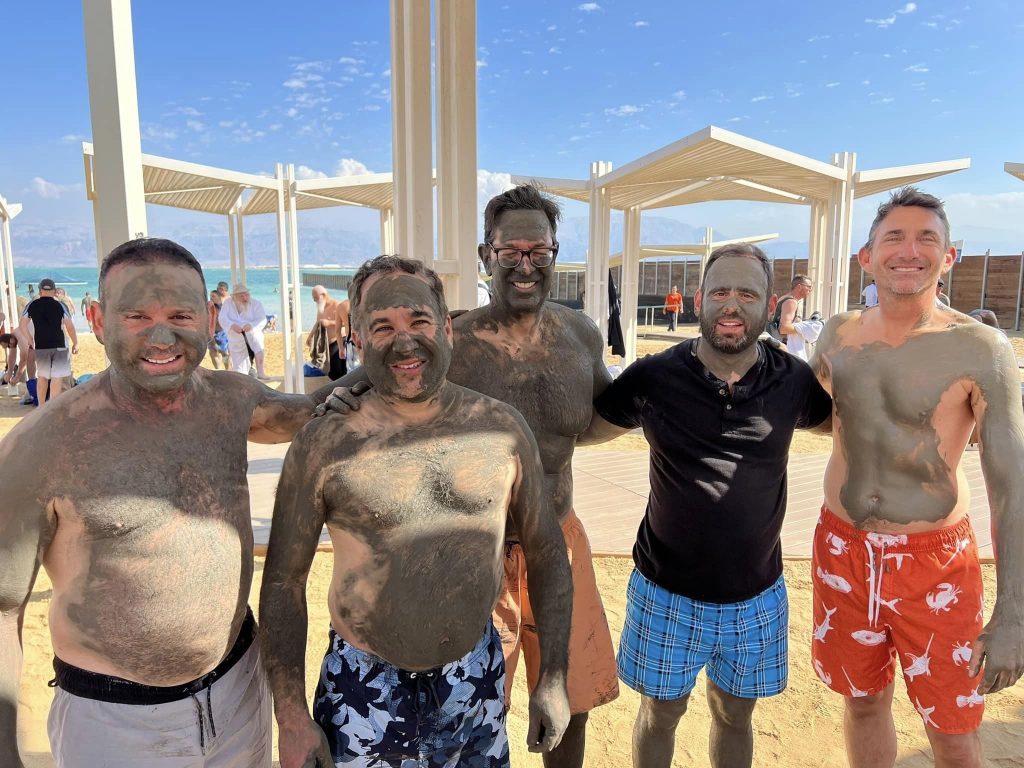 After lunch, we headed back to Jerusalem to visit Ammunition Hill.  This is the site of a key battle in the Six-Day War.  It was essential for Israel to capture Ammunition Hillel (named because it had been a British Ammunition depot) in order to liberate the old city of Jerusalem.  It was an incredibly fierce battle and when you see the battle site, it’s amazing to think what these soldiers went through and the bravery they exhibited.  I first came to Ammunition Hill in 1989 on my first trip and it’s always been a place that is intriguing to me.  After the tour of the battlefield, we went inside where General Effie Eitam (Ret) spoke to us.  General Eitam is a true hero.  He told us stories about the raid on Entebbe, in which he played a key role, and how miracles really happen in Israel.

The stories related to Entebbe.  After the plane was hijacked, they didn’t know where Entebbe was.  He was sent to the store to buy a globe so they could figure it out.  Using a globe isn’t a good way to plan a raid.  And just when they felt most hopeless, the phone rang.  It was an Israeli engineering company who told them that they heard about the hijacking and that the plane was headed to Entebbe.  This firm had built the Entebbe airport and had all the plans available, “if the IDF wanted them.”  A true miracle.

The second story about Entebbe related to the creation of the plan for the raid.  The plan involved parachuting from a plane into a lake and then swimming to shore to gain access.  The plan was almost finished when once again, the phone rang.  This time it was another company that told them they didn’t want to parachute into the lake for entrance.  After getting over the fact that the operational security was terrible and their plans were being leaked, they asked why.  It turns out that Idi Amin, the rule of Uganda, liked to take his enemies out on his boat for a breakfast meeting on the lake.  He would end up throwing them into the lake, which was packed with large crocodiles.  Without that call, they never would have known there were crocodiles in the lake and the raid would have been a disaster.  General Eitam was on the plane that raided Entebbe.

And he told us that “it’s impossible to be a realist in Israel without believing in miracles.”  He is truly an incredible man and I hope to one day take him up on his offer to us to visit him and his family in their home.

It was a long and exhausting day as we headed back to the hotel.  The first thing I did was run a hot bath to soak in.  My body was sore from the time on the bus, the hike up Masada, floating in the dead sea, and not much sleep.  It felt great to relax.  After a quick shower, it was time to head out to dinner at one of my favorite places, Lechem Basar in First Station (the old train station).  The food is incredible and the company and conversation great.  I had a ‘Curb Your Enthusiasm’ experience as the door to the restaurant was open and it was cold.  So I got up to shut it.  Immediately somebody went through the door and propped it open.  So I’d get up and close it again.  And immediately somebody would go through the door and prop it open.  We had great laughs and imagined what Larry David would end up doing since I was clearly Larry David in this situation. 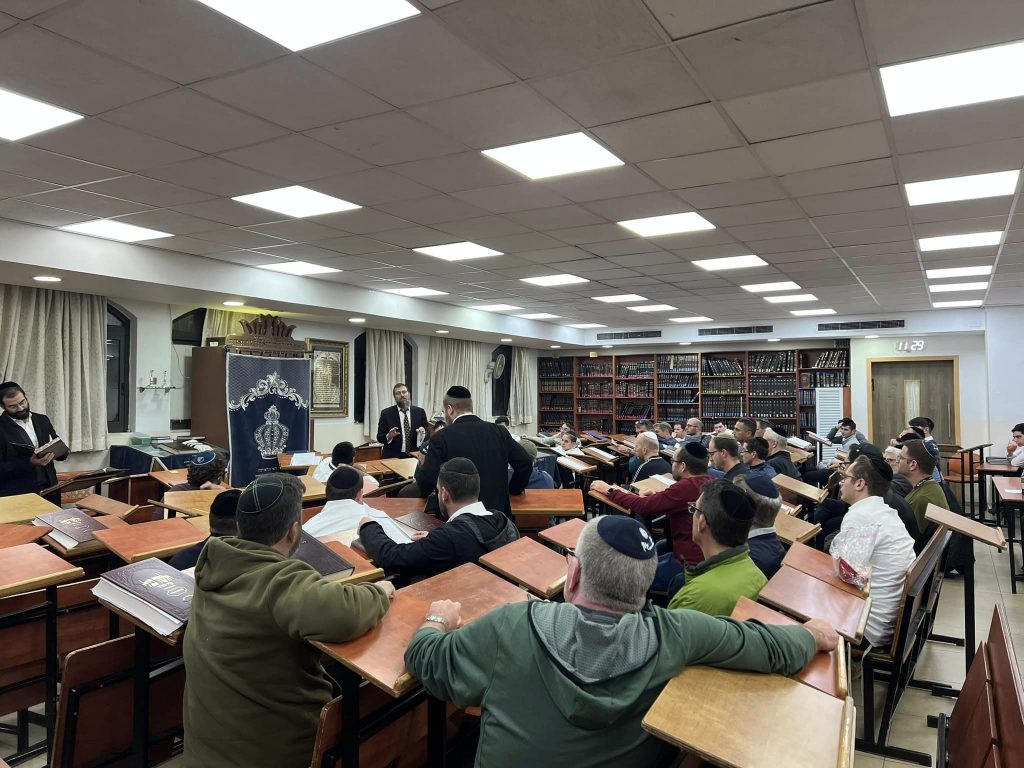 After dinner we headed to a Yeshiva for a late night learning session.  It was fascinating to participate as we discussed medical ethics and prayer with the 18-20 year old students and the Rabbis.  Their tradition is to start at 11 pm, end at midnight, and then have chicken poppers and cholent to eat.  I was too full from dinner to have any food but I enjoyed the conversation and experience.

It was finally back to the hotel to sleep.  Another incredibly full and rewarding day.