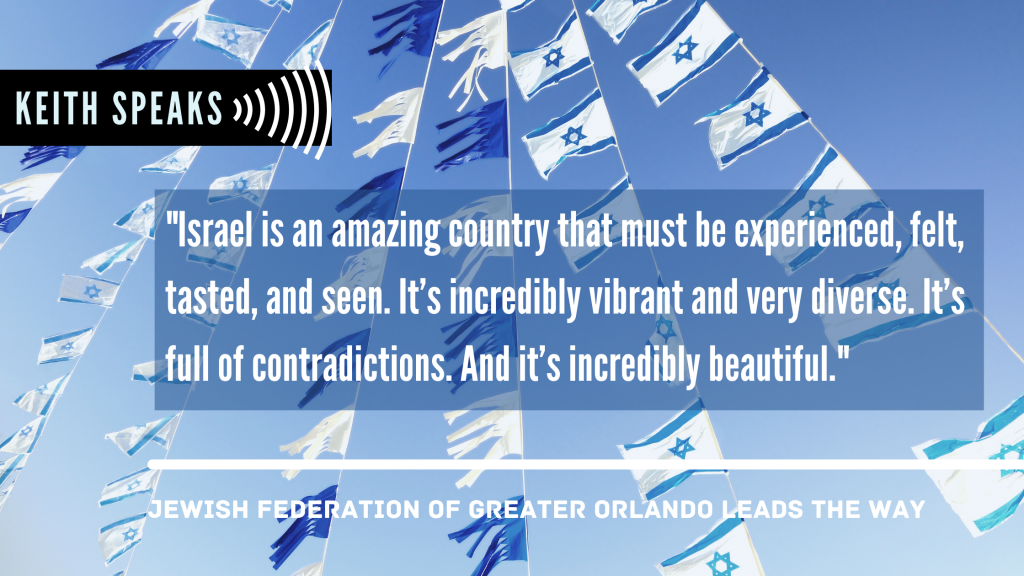 Today is Yom Hazikaron, Israel’s Memorial Day.  It’s very different here than in the United States.  It’s not a 3-day weekend.  There aren’t big sales or barbecues.  It’s a solemn day.  People wear white shirts to honor and remember those who lost their lives in battle or due to terrorist attacks.

We started the day in Jaffa at the home of an amazing women, Rachel, who helped us understand and unpack Israel and Israeli society through children’s literature.  It was truly fascinating, and a number of the stories were incredibly moving.  In Israel, losing loved ones due to war or terrorism is something that impacts almost every family.  It may be a relative, a neighbor, a friend, or a friend’s child.  As such, children’s books address it.  On Yom HaZikaron, it was a powerful and painful reminder of the cost of having the State of Israel.

We left her house at 10:45 to walk toward a busy street.  This is because at 11 a.m. on Yom HaZikaron, there is a 2-minute siren across the country to remember those who have lost their lives.  Traffic stops (mostly), people get out of their cars, stop walking, and just listen and remember.  It’s powerful to see this in person and truly makes you think about the cost of freedom and of a Jewish state.

One thing that is very unique about Israel is how Memorial Day (Yom HaZikaron) is followed immediately by Independence Day (Yom Ha’atzmaut).  There is no break or no transition.  It’s a bipolar holiday—from the depths of sadness and mourning to the heights of celebration.  We spent some time in Neve Tzedek, one of the first neighborhoods of Tel Aviv, preparing ourselves, as a group, for the transition.  After our preparation, we had the ability to go on our own and celebrate Yom Ha’atzmaut.

A couple of us chose to go to Jaffa and explore.  We walked the streets, most stores still closed from Yom HaZikaron, and enjoyed the uniqueness of Jaffa.  Jaffa is the port city where Jonah goes into the water and is swallowed by the whale (really, it says ‘Big Fish’).  After walking around for a while, we headed to meet a number of people from our group for dinner at Itzik HaGadol (Big Itzik), a steakhouse right on the Jaffa/Tel Aviv border that came highly recommended.  Seven of us had a big table in the back where we prepared for a feast.  They start with 30 different salads.  It was incredible.  One was better than the next.  The falafel and fried eggplant were amazing.  The chopped liver was incredible.  All sorts of eggplant, spicy dishes, veggies, and more.  We laughed as we looked at all the food on the table, just from the salads!  Of course, we ordered meat, and it was delicious.  We sat and ate and talked and laughed for 3 hours.  The waiter never rushed us, and we finally asked for the check so we could head out towards Rabin Square for Yom Ha’atzmaut. 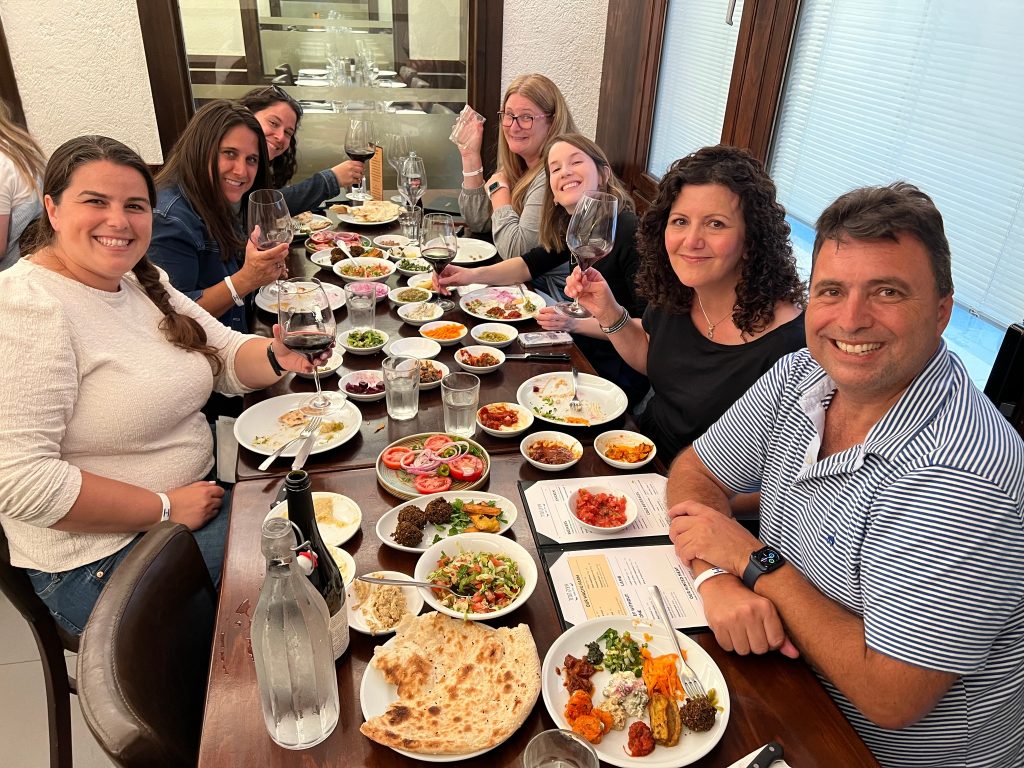 A delicious final dinner in Israel.

Off we went, walking 45 minutes to Rabin Square.  We walked through Shuk HaCarmel where there were people celebrating and stalls open.  We walked through groups of people celebrating and you could feel the energy.  By the time we got to Rabin Square, the festivities there were over.  The building was lit up and beautiful, however it was quite different than the last time I was here for Yom Ha’atzmaut, when Rabin Square was still partying when we left at 1 a.m.  The impact of COVID and gathering was clear.  On our walk to the hotel, it was amazing hearing the music pounding and seeing all the house parties celebrating Independence Day.  I felt like I could have just walked into any of them and would have been welcomed and had a good time. 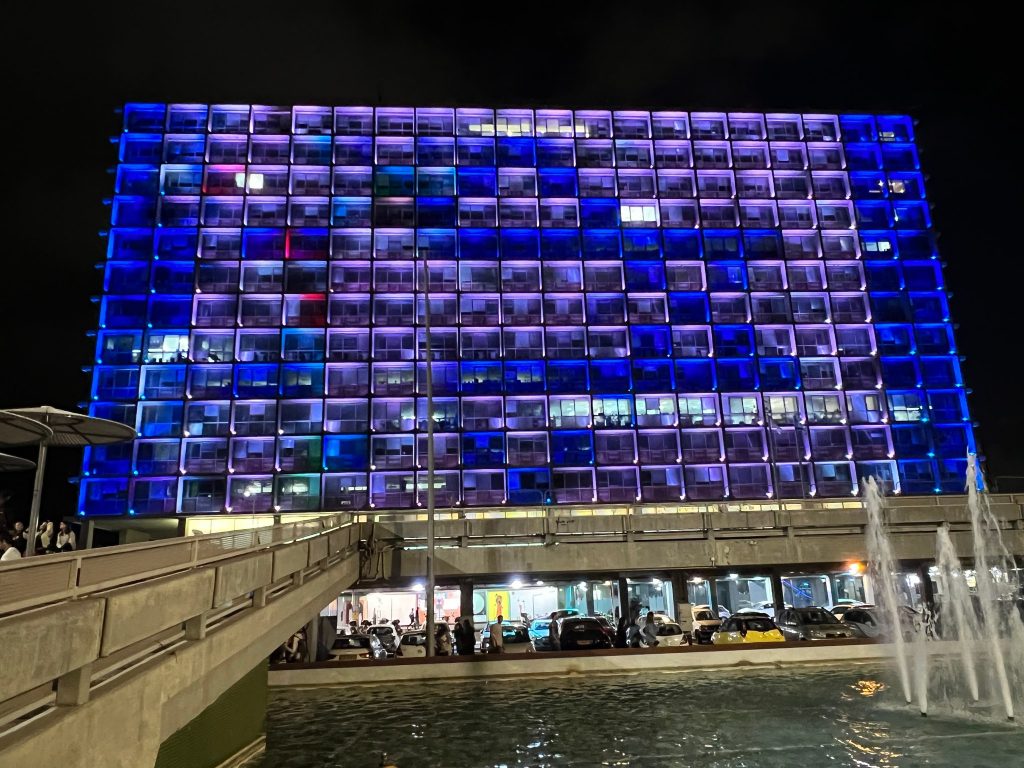 We walked a few miles tonight from Jaffa to the old port in north Tel Aviv, going through Neve Tzedek, Shuk HaCarmel, and Rabin Square.  Many people think Israel is dangerous and not safe.  Nothing could be further from the truth.  It felt safer than after an Orlando Magic game downtown.

Israel is an amazing country that must be experienced, felt, tasted, and seen.  It’s incredibly vibrant and very diverse.  It’s full of contradictions.  And it’s incredibly beautiful.

Tomorrow is my last day here on this trip.  As I go to sleep tonight, it’s the last night I’ll sleep in Israel on this trip.  It’s sad for me.  Being here inspires me and fills my spiritual cup.  The good news is that I know I’ll be back and this is a temporary goodbye, or as Israelis say, “L’hitraot,” until we meet again.