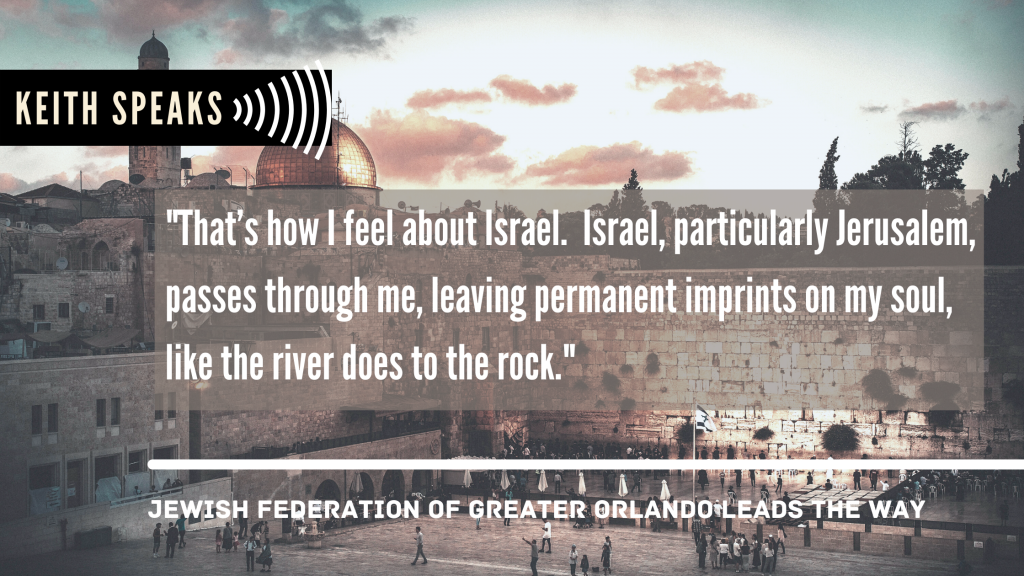 Today was Yom HaShoah, Holocaust Remembrance Day.  I have never been in Israel for Yom HaShoah and as you know, last night was incredibly impactful and meaningful as I had the chance to hear from Ruth, who was a part of the Kindertransport in 1939.  Today was mainly spent in two locations, each very powerful and meaningful places.

We began the day by going to the old city of Jerusalem.  I love the old city.  Wandering the streets of the Jewish quarter, the Armenian quarter, the Christian quarter, and even parts of the Muslim quarter.  There is a feeling in the air, the smells and sounds are different, and it’s easy to close my eyes and feel like I am 2,000 years ago when I’m in the old city.

Today began a little differently.  We entered through the Dung gate (this was the gate used to remove trash, hence the name) and went to the egalitarian part of the Kotel.  I have spent time at the men’s side of the Kotel and on the plaza may times, however I have spent very little, if any time, in the egalitarian part.  I have always believed it was very important to have this sacred space, but it was never a place I really wanted to go.  I love my experiences on the men’s side.

I was struck by a number of things as we began the day here.  First, was how different this space was compared to the men’s and women’s sides of the Kotel.  It felt less than, and I wasn’t as connected.  There was another group there praying and they were singing the melodies I’d hear at synagogue rather than the ones I hear at the men’s side.  It felt much more modern and I found myself distressed that the egalitarian side didn’t have the same experience as the men’s or women’s side.  Why should it be any less than?  Perhaps it really isn’t, and it’s just my own expectations and desires.  The image of the paratroopers in 1967 is a powerful one for me and has always defined the Kotel.  This section is definitely not in that image.  It made me think about the inequality at the Kotel and wonder why we do that to ourselves.  Shouldn’t everybody have equal access to this powerfully spiritual space?  It left me with more questions than answers. 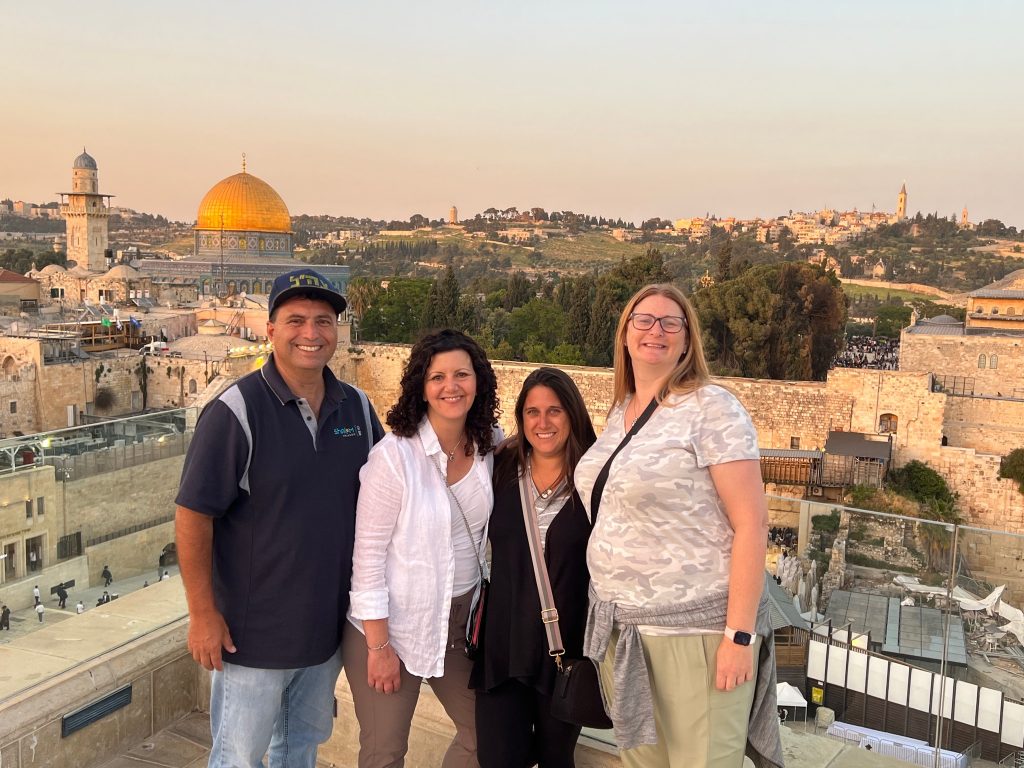 A view of the Kotel.

We left the egalitarian section and headed to the main plaza.  As one of two men on this trip, I walked away from the group and headed toward the men’s section.  It was almost 10 a.m. and that is when the siren sounds in Israel on Yom HaShoah.  I chose to wait on the plaza for the siren before entering the men’s area.  When the siren began, I felt wrapped by the sound.  It enveloped my entire body and as I stood there, facing the Kotel, all I could think about was the 6 million Jews who perished in the Holocaust and never had a chance to experience the Kotel.  Six million Jews who didn’t get to have this direct connection with Israel and whose lives were cut short for no reason other than hatred.  I found myself wondering why we continue to say ‘Never Again’ yet watch as it does happen again to others, like what is happening in Ukraine right now.  I found myself wondering if I was going to be one of those who stood by and did nothing, or would be one who acted and did what they could to make a difference.  When the siren ended, a group of teens next to me began singing Hatikvah, the Israeli national anthem, and I joined in fervently.  It felt right to be singing Hatikvah on Yom HaShoah, at the Kotel, right after the siren remembering those murdered by the Nazis.

When I went into the men’s section, I stopped to put on tefillin before approaching the Kotel.  Amazingly, there was a perfect spot for me at the Kotel and I took it.  I took the two prayers I had written and brought with me out of my pocket, said them one after the other, and placed them both into the Kotel.  I closed my eyes, put my forehead against the Kotel, and began to pray.  For the first time, I lost myself in prayer at the Kotel.  It was a powerful and meaningful experience, shaped by many, many prior trips to the Kotel, as well as it being Yom HaShoah.  More than 12 hours later, I still feel the energy running through me from this time at the Kotel.

I rejoined the group and we explored the Old City before breaking for lunch.  I have a favorite jewelry store in the Cardo that I have been shopping at for years.  Named for its owner, Mira, I always go by and talk to Mira, usually buying a gift or two (or more).   I hadn’t seen Mira since 2019 and was excited to see her, reconnect, and talk.  I was shocked to find out that she had died a few months after the last time I saw her.  I was surprised how much it hurt to know she was gone since I only saw her for 20-30 minutes once a year, at most.  I went into the store and talked to her son, who now runs it.  We talked about his mother and how special she was.  He told me stories of his young children and what they remember about their savta.  It was heartwarming to make a connection with him about Mira.  I think every time I see that sign, I will miss her a little more.

Unlike most trips I have taken to the Old City, this one concluded by visiting the Christian quarter and the Church of the Holy Sepulcher.  I have been there before, however our tour guide provided a great overview.  It’s a powerful place to visit, as I get to watch others have the same type of experience that I have at the Kotel.  From the place Christians believe Jesus was crucified to where his body was prepared for burial to the burial cave, it is both beautiful and powerful.  There are five different denominations that call the Church of the Holy Sepulcher home, and to see them all there was interesting.

We left the Old City and went to Yad Vashem, Israel’s Holocaust Museum.  Because it was Yom HaShoah, the museum part of the complex was packed with people and so we didn’t go into the museum.  Instead, we focused on other areas of the campus.  We walked around and through the Pathway of the Righteous unto the Nations and saw the tree planted for Oskar Schindler and his wife.

I saw a tree planted for a couple from Ukraine and wondered who would be the Righteous unto the Nations to help people in Ukraine now?

We went to the Children’s Memorial, which is always very emotional for me.  Before walking in, we stopped at the memorial for Janus Korczek.  For those who don’t know who he was, Janus Korczek was a very famous children’s author.  He was Poland’s equivalent to Mark Twain, and his books were similar to Tom Sawyer and Huck Finn.  He was the principal of an orphanage in Warsaw and in 1942, the Germans came to liquidate the ghetto and took all the orphans to the train station to go to Treblinka.  As he approached the trains with the children, one of the SS Guards recognized him and told him he shouldn’t get on the train and was going to save him.  Korczek told him that ‘where my children go, I go.’   He boarded the train with the children from the orphanage and they all were murdered at Treblinka.  I was struck by the power of responsibility and obligation.  Of selfless service to the children so they didn’t have to go alone in terror.  What a great man to learn from, 80 years after his death.

We entered the children’s memorial and as usual, I gulped entering.  It’s dark with candles and mirrors, making it seem like all the stars in the sky.  As you begin to walk through, the names of the 1.5 million children murdered in the Holocaust are read.  My prior experiences have usually involved the thought of my own children’s names being the ones that were being read and what that would be like.  It was terrifying and immensely sad.  My children are now 19 and 22.  Their names wouldn’t be read; they would be in the main museum.  I realized that my future grandchildren would be the names that were read.  Or the little girl that I made pita with yesterday in Yerucham.  It was a powerful realization about life.  And then I heard the names of children from Ukraine.  It was like a slap in the face.  It happened in the Shoah and it’s happening again now.  It was incredibly sobering and made me angry. 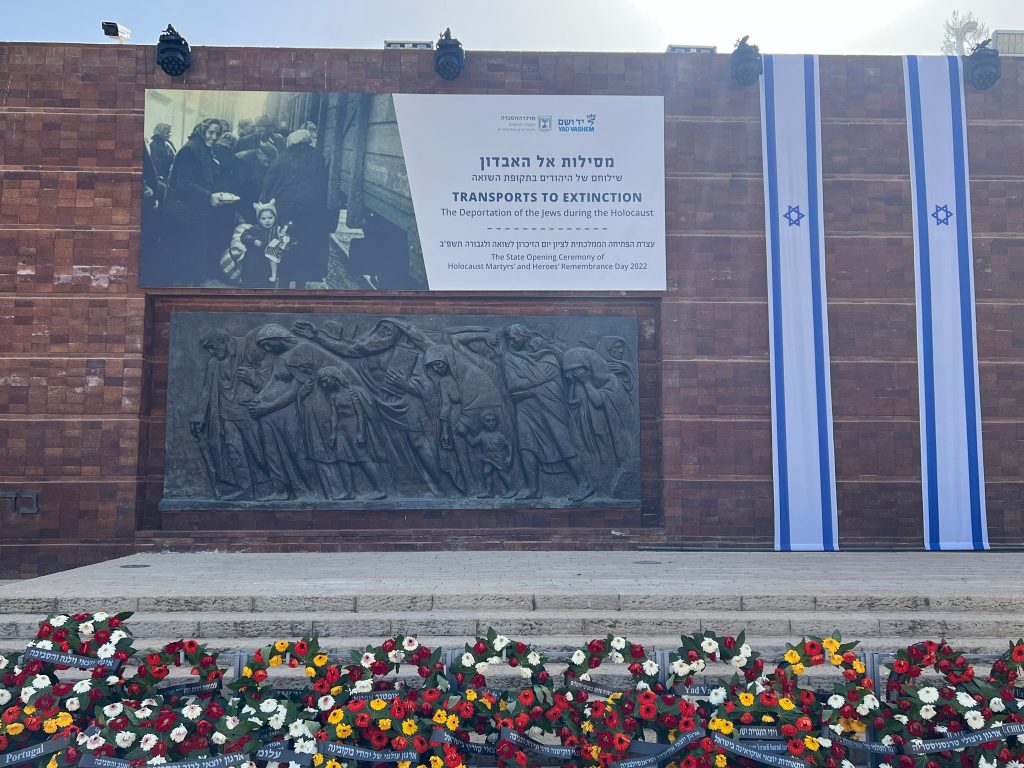 Outside at Yad Vashem.

As we exited the children’s memorial, we went to a park-like area to sit and debrief.  As we discussed what we felt and experienced, I found myself looking out beyond Yad Vashem onto the modern city of Jerusalem and feeling hope.  Despite losing 6 million of us during the Shoah, despite odds far against us in wars with our neighbors, we have persevered and overcome.  We have not only survived, but we have also thrived.  Israel is our growing, living testament to that.

We left Yad Vashem and returned to the hotel.  Melissa, Fara, and our friend Lauren joined me as we walked back to the Old City to enjoy the view of the Kotel plaza from the roof of Aish HaTorah.  I have a friend who works there that showed us a bit of Aish and then took us to the roof.  I have been there before, however the view is so magnificent that it still takes my breath away.  We stood on the roof absorbing the power of the view and talking.  The time passed quickly and suddenly it was time to leave for dinner. 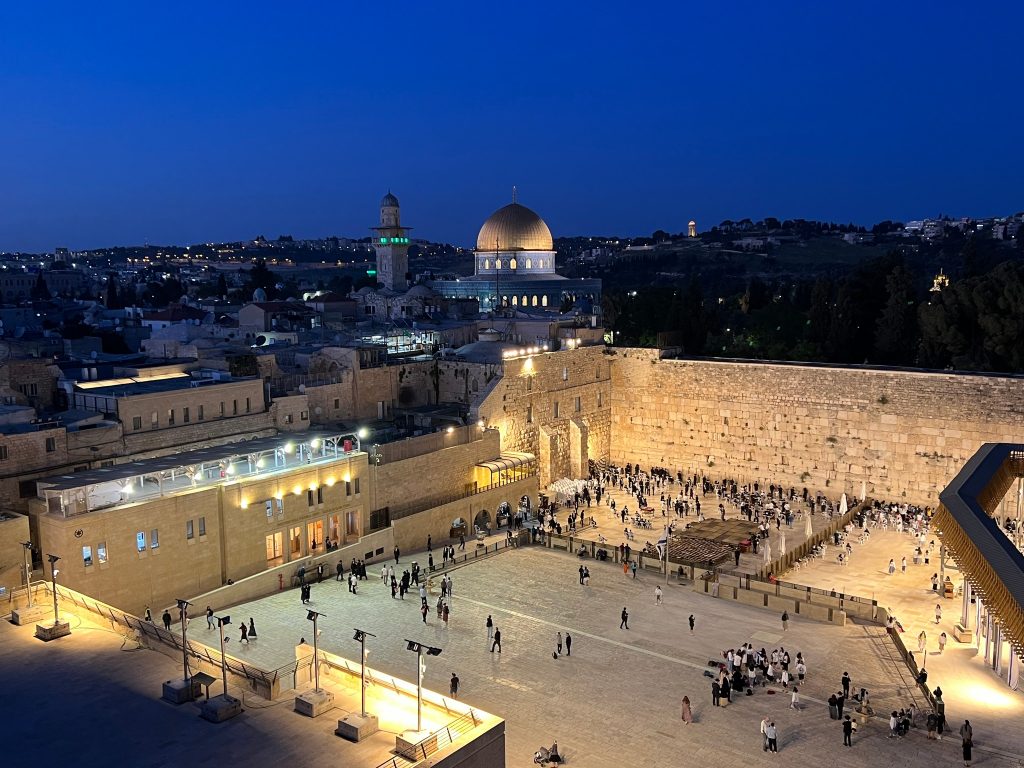 The view from Aish HaTorah.

We wrapped up the day with Dinner at First Station (the old train station).  It’s a hot, hip, and fun area with some great restaurants.  I made reservations at the steakhouse, having eaten there before, and knowing how great the food is.  We ate, laughed, talked, and wrapped up the day.  It truly was a fitting end to Yom HaShoah; laughter is life, and while Yom HaShoah remembers those whose lives were stolen from them, it also allows us to have hope and look to the future.

During our time this morning at Robinson’s Arch, the egalitarian section of the Kotel, a poem by Rabbi Lawrence Hoffman was read.  One line stood out to me:

Pilgrims allow places to pass through them.

That’s how I feel about Israel.  Israel, particularly Jerusalem, passes through me, leaving permanent imprints on my soul, like the river does to the rock.