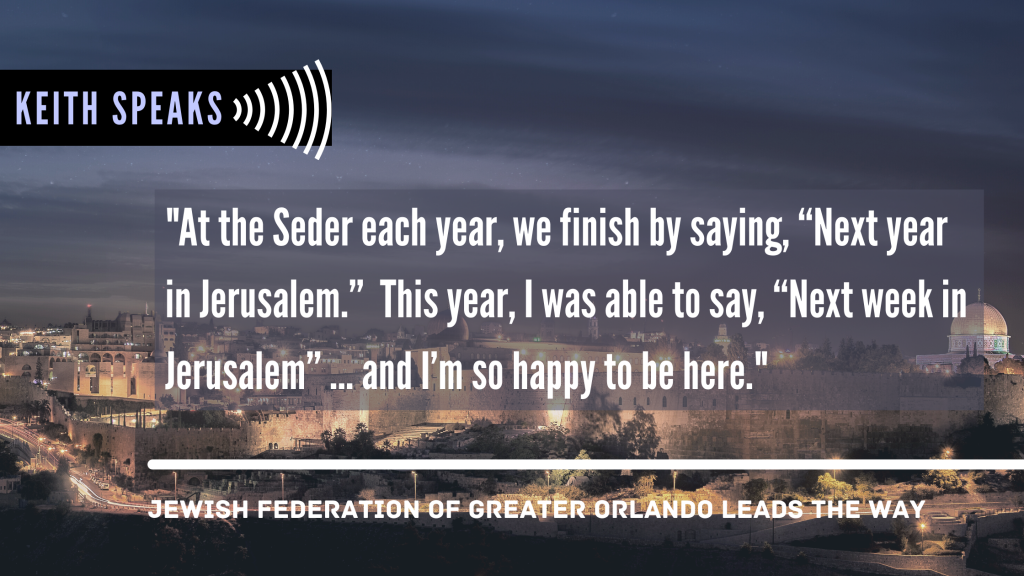 Waking up in the desert is always something special.  After breakfast, I took a short walk to Aroma to get my iced coffee, and the weather was amazing.  I didn’t want to get on the bus and go anywhere—just enjoy the weather and the beauty of the desert.  But I did get on the bus, and off we went.

We spent the morning in Yerucham, the partnership city of the Greater Miami Jewish Federation.  I’ve heard about Yerucham for years but have never visited.  It was a very cute town that looked and felt like most small towns.  We began by visiting a park with a beautiful lake.  As we looked out over the lake and learned about Yerucham, all of a sudden, a car drove up with a camel tied to the door, running alongside!  We were all shocked at what we saw.  The driver parked, got out, untied his camel from the car and took him to the water to drink and some bushes to eat.  It was one of the most bizarre things I have seen—a camel tied to a car, running alongside it. 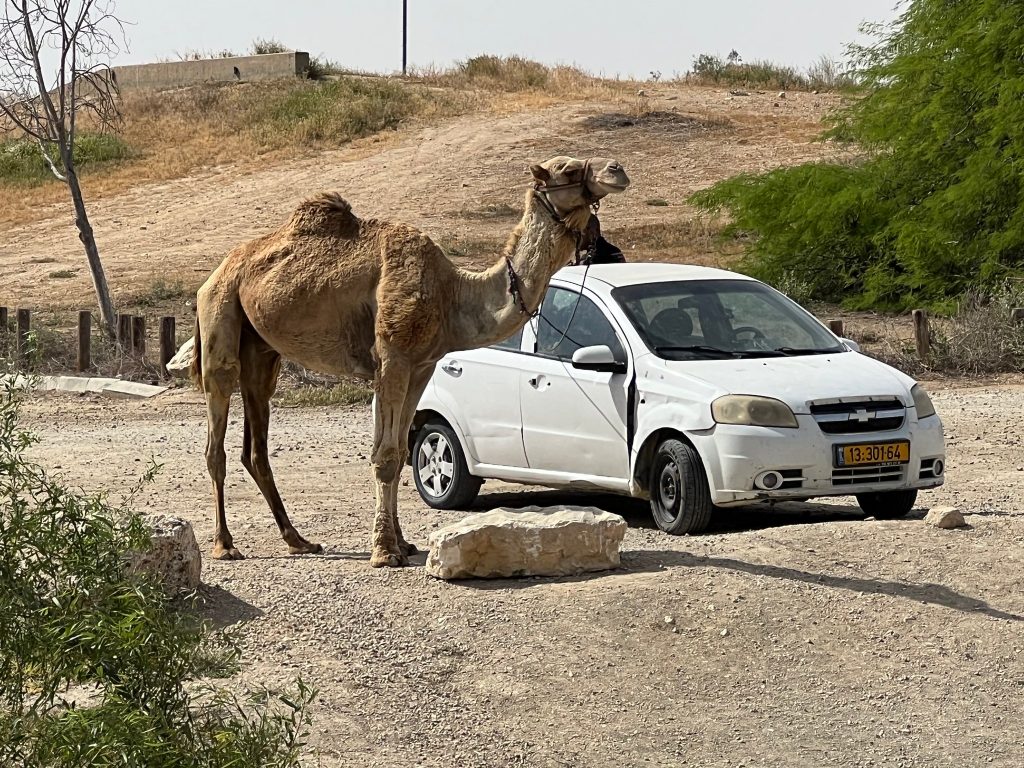 The camel and its car.

We left the lake and headed to one of the many early childhood centers in Yerucham.  Interestingly enough, while they have many centers that run independently, they are all under the supervision of the same person.  Since this is Israel and we are currently counting the Omer, they had the 2- and 3-year-old children outside grinding wheat.  They also had them making their own pita bread, kneading the dough.  The little girl sitting next to where I was standing wasn’t doing anything with her dough, so I started to show her how to do it and we did it together.  We had so much fun and this little girl stole my heart.  As we left the school, she blew me kisses and my heart melted the way only a little child can make it melt.

We visited a facility that takes care of the needs of children.  In Israel, they have something called tipot chalav, or “drop of milk.” This is a medical center that provides all the healthcare needs for children.  Vaccinations, wellness checkups, etc.  They place these facilities in neighborhoods to make access easy for families with young children to ensure the children are healthy.  It was truly amazing to learn about and see in practice.  The sensory rooms were amazing and there was much to learn.

The community center was our final stop before lunch.  It was a combination of a public library and community center.  It was fascinating to see how they are both different from our JCCs and how similar they are.  How we share many of the same challenges and are coming up with similar solutions.  It inspired me to have colleagues in Israel addressing the same things, which means that maybe the challenges we face aren’t so unique!

For lunch, we went to an interesting restaurant.  It is a place in somebody’s home that is part of a program that retired women started to cook for tourists, keep themselves busy, generate revenue, and share their stories.  What started as one has now grown to five or six in Yerucham.  The food was delicious, and afterward we heard from two women about the program and their personal story.  It was truly inspiring.

While it felt like we’d already had a full day, we weren’t close to being done.  We left Yerucham and traveled to Nativ HaSarah, a small village right on the border of the Gaza Strip.  We met with a woman who lives there and has endured the challenges of all the rocket attacks.  As an artist, she decided to do something creative and created an organization called Path to Peace.  Using her art, she is decorating the walls protecting the town.  We heard her story and then got to select a small piece of pottery that spoke to us, write a message on the back, and take it with us to the border to place it on the wall, filling words like Peace, Shalom, etc.  This artwork faces Gaza so the people living there can see it.  It was incredible to be right at the border with Gaza and to imagine what it is like to have 5 seconds to get to safety when the alarm goes off.  It was depressing to see the children’s school bus stops are bomb shelters.  We can all hope and pray for peace throughout the world, however standing at the Gaza border, I felt no hope.  On the other side of the fence, Gaza looked so bleak to me. 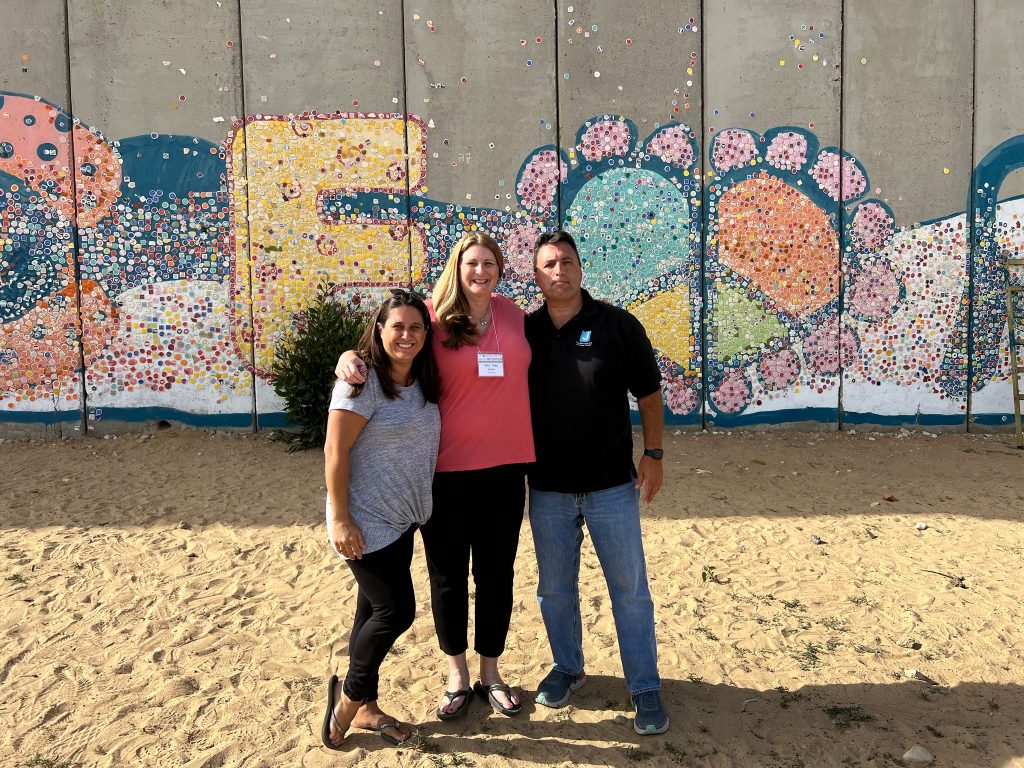 Keith, Fara Gold, and Melissa Youngblood at the Path to Peace wall.

We left the border and headed north toward Jerusalem, but we had one more stop before returning to our hotel.  As the dusk began, so did Yom Hashoah (Holocaust Remembrance Day). I have never been in Israel for Yom HaShoah.  Our stop was to meet Ruth and hear her story as one of the Kindertransport children, who in 1939 left their parents and families in Germany and traveled to London to escape the Nazis and the death camps.  She was 13 when she left her family to board the train that would eventually take her to London.  At 97-years-old, Ruth often needed her daughter to repeat the question, however her memory of 1939 was crystal clear.

Hearing her tell the stories of how things changed for her and her family was horrifying and inspiring.  It was heartbreaking, and yet knowing she survived and has two children, six grandchildren, and a number of great-grandchildren gave me hope for the future.  Ruth was lucky in many ways—she went to London to a boarding school for refugees and was treated well.  Her parents were able to get out of Germany and they were reunited, although she didn’t live with them for a 3-year period.  She told us the story of her husband, who also escaped but lost his entire family to the Nazis.  Her daughter told us how her father (z”l) would never speak about his childhood and wouldn’t share any information about his parents, siblings, aunts, or uncles.  He refused to speak German and wouldn’t buy anything German.  Her aunt (Ruth’s younger sister) still lives in England and refuses to discuss the Kindertransport or anything about Germany.  This was a very special way to mark Yom Hashoah; even our visit to Yad Vashem tomorrow, also on Yom Hashoah, may not have the same impact as Ruth.

We left and headed to Jerusalem.  I always love seeing the lights of Jerusalem when you enter the city at night.  After checking into the hotel, I sat on my balcony looking out at the beauty of the city and took a few pictures to share.  It truly is the City of Gold, and I’m excited to spend a good part of tomorrow exploring the Old City, which never gets old for me.  A few of the people on the trip are here for their first visit to Israel, and being with them as they experience Jerusalem for the first time is also exciting.

At the Seder each year, we finish by saying, “Next year in Jerusalem.”  This year, I was able to say, “Next week in Jerusalem” (even though it was really more than a week) and I’m so happy to be here.