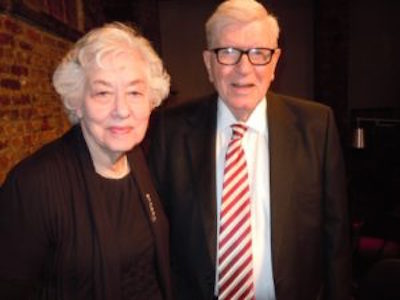 Join us for a live virtual conversation with Holocaust Survivors Hanne and Max Liebmann. Johanna (Hanne) Hirsch was born November 28, 1924, in Karlsruhe, Germany. Her father, Max, a photographer, died in 1925. Her mother, Ella, perished in Auschwitz. Her aunt and her paternal grandmother, Babette, died in Gurs. Two aunts survived and eventually came to the United States.

Max Liebmann was born September 3, 1921, in Mannheim, Germany. He attended German school until 1938, but continued studying in a private business school, and pursued music. His father went to Greece in 1938 as Jews had difficulty working in Germany. Forced from Greece, he traveled to France, but was arrested and deported in 1944 never to return. Max’s mother perished in Auschwitz. His paternal grandmother, a French citizen, died in Nice, after Switzerland denied her entry.
On October 22, 1940, 6,504 Jews from the Baden, Palatinate and Saar regions of Germany —including Hanne and Max—were arrested, as part of Operation Bürckel, and deported to Gurs, a French-run concentration camp in the “free zone.”

In Gurs, latrines were collective, heat was nonexistent, the ground was muddy, and food was scarce. Disease and starvation were rampant. Yet, Hanne and Max met as she worked in an office with Max’s mother.

The Œuvre de Secours aux Enfants (OSE) “transferred” Hanne and Max from Gurs. Hanne immediately went to Le Chambon-sur-Lignon, but Max went to Talluyers, near Lyon, where he was denied false papers. He fled to Le Chambon, hid for three weeks and was given fake papers stating he was Alsatian “Charles Lang.” He escaped to Switzerland.
Hanne remained in Le Chambon for almost a year before going to Switzerland with fake papers saying she was Parisian “Anne-Marie Husser.”

Join us to hear their fascinating story of love and survival. Hanne and Max married on April 14, 1945, and have one daughter, one grandson and two great-granddaughters. The recently celebrated their 75th wedding anniversary.

About Our Interviewer:
Paul Kutner is a French teacher and Holocaust researcher. In 2012, he was a grant recipient from the French Embassy in the United States to incorporate history into his language classes. He has researched the rescues in Le Chambon-sur-Lignon and Dieulefit as well as the Vél d’Hiv roundup. He was the researcher and writer of the 2017 exhibit Conspiracy of Goodness at the Harriet and Kenneth Kupferberg Holocaust Center on the campus of CUNY-Queensborough Community College in New York City. He lives in Rockville, Maryland.