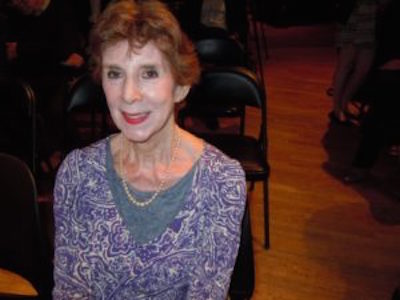 Renée Kann Silver was born in 1931 in the Saarland. After a plebiscite in 1935 called for reunification with Germany, her family moved to France. Because they were of German origin, when the War broke out in France in May 1940, her family was interned in Gurs, but they were released once the Armistice was signed. They ended up in Villeurbanne, outside of Lyon, and then Renée and her younger sister, Edith, were taken to Le Chambon-sur-Lignon, but were housed separately, and unhappily. After a short time, Renée found her little sister and took the trains back to Villeurbanne alone. They went back to Le Chambon, but then were reunited with their family, obtained fake papers, and escaped to Switzerland.

“I would not be here if not for the Righteous Gentiles. These were people who did not hesitate for one second about what would happen to them if they were discovered hiding Jewish children,” Silver said. “Nobody had to tell them what to do, they were just human beings doing the right thing.”

Silver maintained that she never once lost hope and continued to pray for her family and France -the homeland that cast her family aside amid growing hatred of those not born in the country.