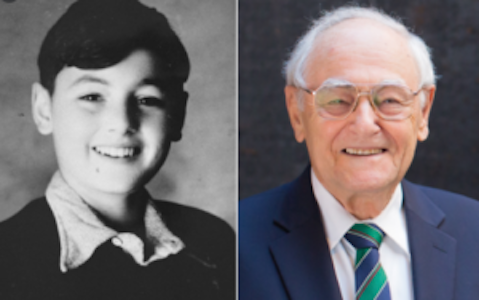 Join us for a live virtual conversation with Holocaust Survivor Peter Feigl.

Peter Feigl (born Klaus Peter Feigl) was born on March 1, 1929, in Berlin, Germany. Peter and his family were assimilated secular members of middle-class Austrian society. Peter’s family moved to Prague in 1936 and then to Vienna in 1937 for reasons connected to his father’s work. Hoping to protect Peter from Nazi anti-Jewish policies, Peter’s parents had him baptized as a Catholic.

As the German occupation spread to Western Europe in 1940, the Feigl family first fled first to Belgium and then to France, where Peter was sent to live at a summer camp run by a charitable Catholic organization. During this time, Peter’s parents were arrested and eventually deported to Auschwitz-Birkenau on September 4, 1942.

Peter had no knowledge of his parents whereabouts, but on his own and with the help of many others, including Pastor André and Magda Trocmé in the Protestant village of Le Chambon-sur-Lignon, Peter was able to obtain false papers and eventually escape France for neutral Switzerland on May 22, 1944. Peter remained in Switzerland until he emigrated to the United States in 1946.

Join us as Paul Kutner interviews Peter to tell his harrowing story of escape and resiliency to survive.