Going Towards the Light 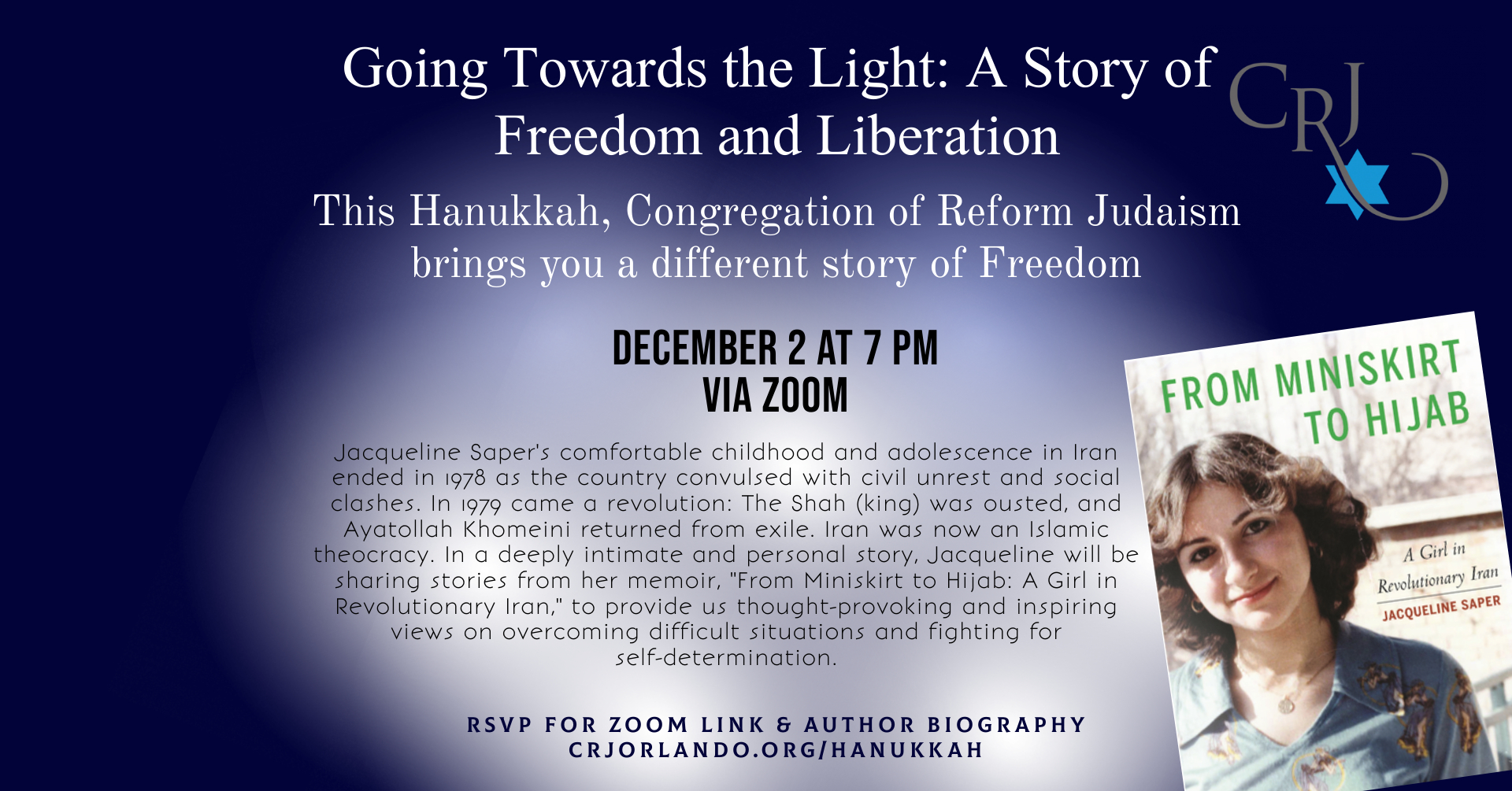 Hannukah celebrates the Jewish affirmation of our spiritual values, and a refusal to buckle down to life under extremist ideologies. This Hanukkah, Congregation of Reform Judaism brings you a different story of Freedom.

Jacqueline Saper’s comfortable childhood and adolescence in Iran ended in 1978 as the country convulsed with civil unrest and social clashes. In 1979 came a revolution: The Shah (king) was ousted, and Ayatollah Khomeini returned from exile. Iran was now an Islamic theocracy. In a deeply intimate and personal story, Jacqueline will be sharing stories from her memoir, “From Miniskirt to Hijab: A Girl in Revolutionary Iran,” to provide us thought-provoking and inspiring views on overcoming difficult situations and fighting for self-determination.

Jacqueline Saper was born and raised in Iran in a bicultural Jewish family with an Iranian father and a British mother. Her memoir, From Miniskirt to Hijab: A Girl in Revolutionary Iran, is Foreword Reviews’ Diversity Book of the Week, a finalist for the Chicago Writers Association 2020 Book of the Year Award, and the 2020 Clara Johnson Award for Women’s Literature. Saper is an expert on Iranian subject matter including the Iranian revolution and its aftermath, Anti-Semitism, human rights violations, U.S. – Iran relations, and the history of the Jews of Persia, and Jews of Iran today. Fluent in Farsi and English, she serves as a translator/interpreter for the National Immigrant Justice Center, working with supervising attorneys on behalf of refugees and asylum seekers. Selected by Left Brain/Right Brain productions, Saper subtitled and translated the Alex and Ali movie, which won the Frameline39 Jury Award for Outstanding Documentary. Her opinion columns and articles appear in national and international publications and she is a regular guest speaker on American television and radio shows. Saper earned the designation of CPA (Certified Public Accountant) from the Board of Examiners of the University of Illinois and is the recipient of Oakton College’s 2018 Distinguished Alumni Award. She can be reached at https://www.jacquelinesaper.com.