Eboo Patel: The Intersection of Interfaith and Racial Equality 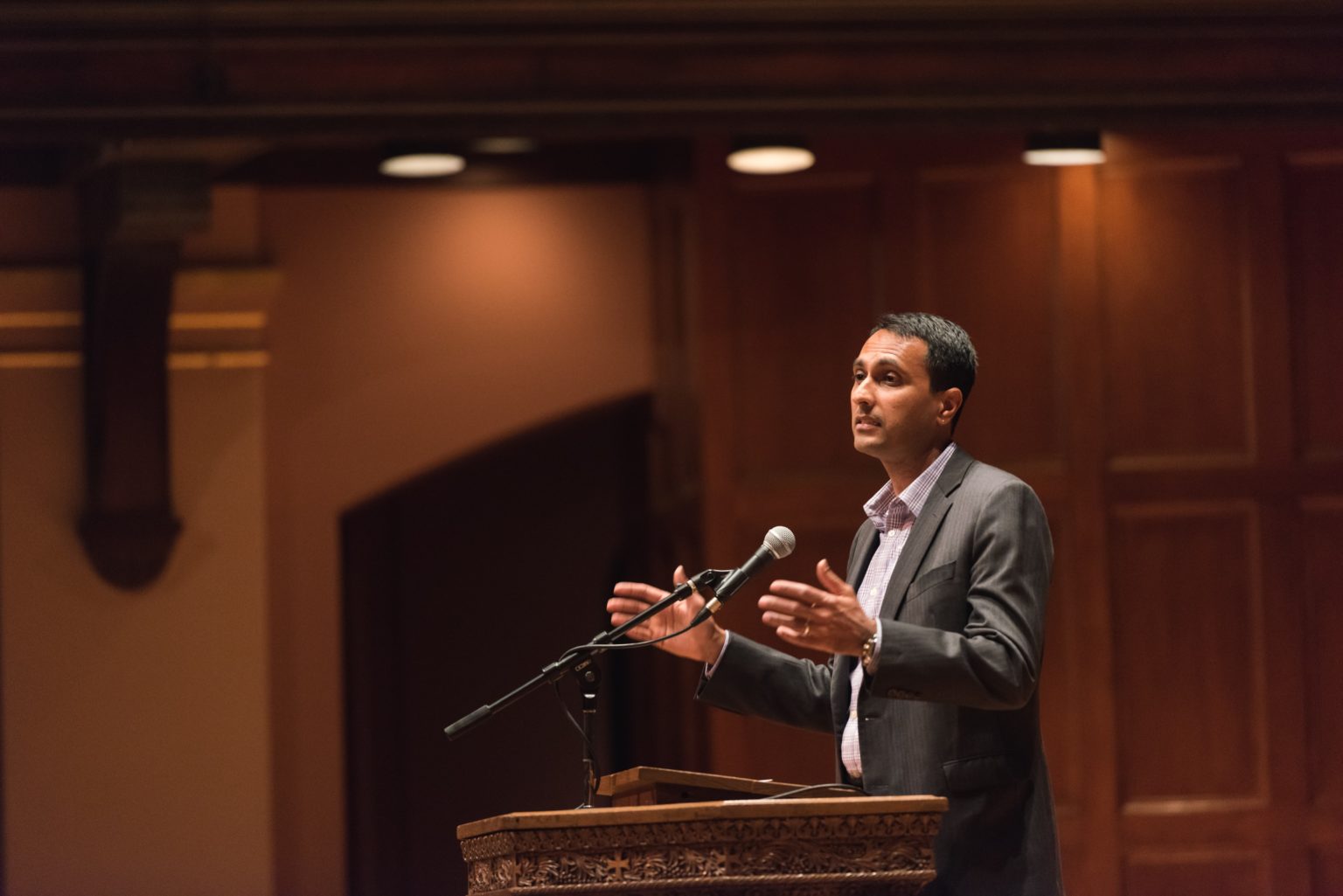 Join us for this live online virtual event featuring Eboo Patel!
“I thought about the meaning of pluralism in a world where the forces that seek to divide us are strong. I came to one conclusion: We have to save each other. It’s the only way to save ourselves.” – Eboo Patel, Acts of Faith

Register in advance for this meeting:
https://zoom.us/meeting/register/tJYkce6hpjooGdFLjC_vkVqOg4T-9AkDpCqc
After registering, you will receive a confirmation email containing information about joining the meeting.

More About Eboo Patel:
Dr. Eboo Patel is the Founder and President of Interfaith Youth Core (IFYC), a non-profit organization working to make interfaith cooperation a social norm in America. He is a respected leader on national issues of religious diversity, civic engagement, and the intersection of racial equity and interfaith cooperation. He is the author of four books and dozens of articles and is a frequent keynote speaker at colleges and universities, philanthropic convenings, and civic gatherings, both in person and virtually. He served on President Obama’s Inaugural Faith Council.

Born in Mumbai, Eboo grew up as an Ismaili Muslim in the western suburbs of Chicago, experiencing bigotry, but also taking inspiration from friends and neighbors from diverse backgrounds. As a student at the University of Illinois, he was involved in social justice work and soon came to realize that the leaders he respected most, found their inspiration in faith. While earning a doctorate in the sociology of religion from Oxford University on a Rhodes scholarship, Eboo began organizing interfaith projects around the world, laying the groundwork for what would become IFYC. Over two decades, he has led the organization from a handful of volunteers to a nationwide non-profit that empowers students and educators on almost six hundred U.S. college and university campuses.

IFYC is now a national nonprofit that equips the next generation of citizens and professionals with the knowledge and skills needed for leadership in a religiously diverse world. Partnering with educational institutions and civic organizations, IFYC is dedicated to making interfaith cooperation the norm and building Interfaith America in the 21st century.

Eboo is an Ashoka Fellow, a member of the Young Global Leaders Network of the World Economic Forum and has served on the Religious Advisory Committee of the Council on Foreign Relations and the National Committee of the Aga Khan Foundation. He was named a Future Policy Leader by the Harvard Kennedy School Review in 2008 and one of America’s Best Leaders by U.S. News & World Report in 2009. He has been awarded the Louisville Grawemeyer Prize in Religion, the Guru Nanak Interfaith Prize, the El Hibri Peace Education Prize, the Council of Independent Colleges Academic Leadership Award, along with honorary degrees from 15 colleges.

Eboo’s contributions include the books Acts of Faith: The Story of an American Muslim, the Struggle for the Soul of a Generation; Sacred Ground: Pluralism, Prejudice, and the Promise of America; Interfaith Leadership: A Primer; and Out of Many Faiths: Religious Diversity and the American Promise. His op-eds and interviews have appeared in The New York Times, Washington Post, The Chronicle of Higher Education, on National Public Radio, and The PBS NewsHour. He also publishes a regular blog for Inside Higher Ed, called ‘Conversations on Diversity’.

Eboo lives in Chicago with his wife, Shehnaz, and two young sons. He is a die-hard fan of Notre Dame Football, Wilco, and really good coffee.