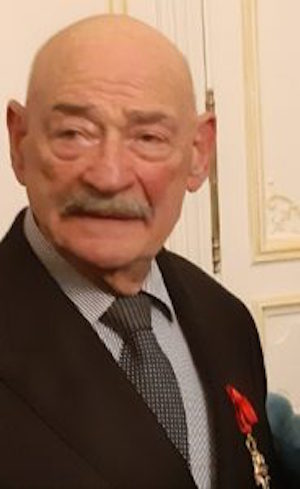 Join us for a live virtual conversation with Joseph Weismann, Holocaust Survivor of the Vél d’Hiv roundup of 1942. On July 16, 1942, at age 11, Joseph Weismann was arrested with his family by French police as part of Operation Spring Wind, more commonly known as the Vél d’Hiv roundup. Of the 13,152 Jews who were taken into custody, over 8,000 were put in the Vélodrome d’Hiver, a covered bicycle stadium in Paris, without food, water or toilets for five days. From there, they were taken by cattle car to the camps of Pithiviers and Beaune-la-Rolande, before eventually being sent to Drancy and then Auschwitz. Twenty-five adults survived, but the only children who survived somehow escaped between their arrest and the final journey to Auschwitz. No children who made it to Auschwitz ever returned.

About Our Speakers :
Richard Kutner taught French and general elementary school subjects at the United Nations International School in New York for thirty-three years. He received the Hemingway Grant from the French Embassy in the United States for his translation of Le Naufragé du «A» (Cast Away of the Letter A) and he also translated Vincent Engel’s novel, La Peur du Paradis (Fear of Paradise). He lives in New York City.

Paul Kutner is a French teacher and Holocaust researcher. In 2012, he was a grant recipient from the French Embassy in the United States to incorporate history into his language classes. He has researched the rescues in Le Chambon-sur-Lignon and Dieulefit as well as the Vél d’Hiv roundup. He was the researcher and writer of the 2017 exhibit Conspiracy of Goodness at the Harriet and Kenneth Kupferberg Holocaust Center on the campus of CUNY-Queensborough Community College in New York City. He lives in Rockville, Maryland.