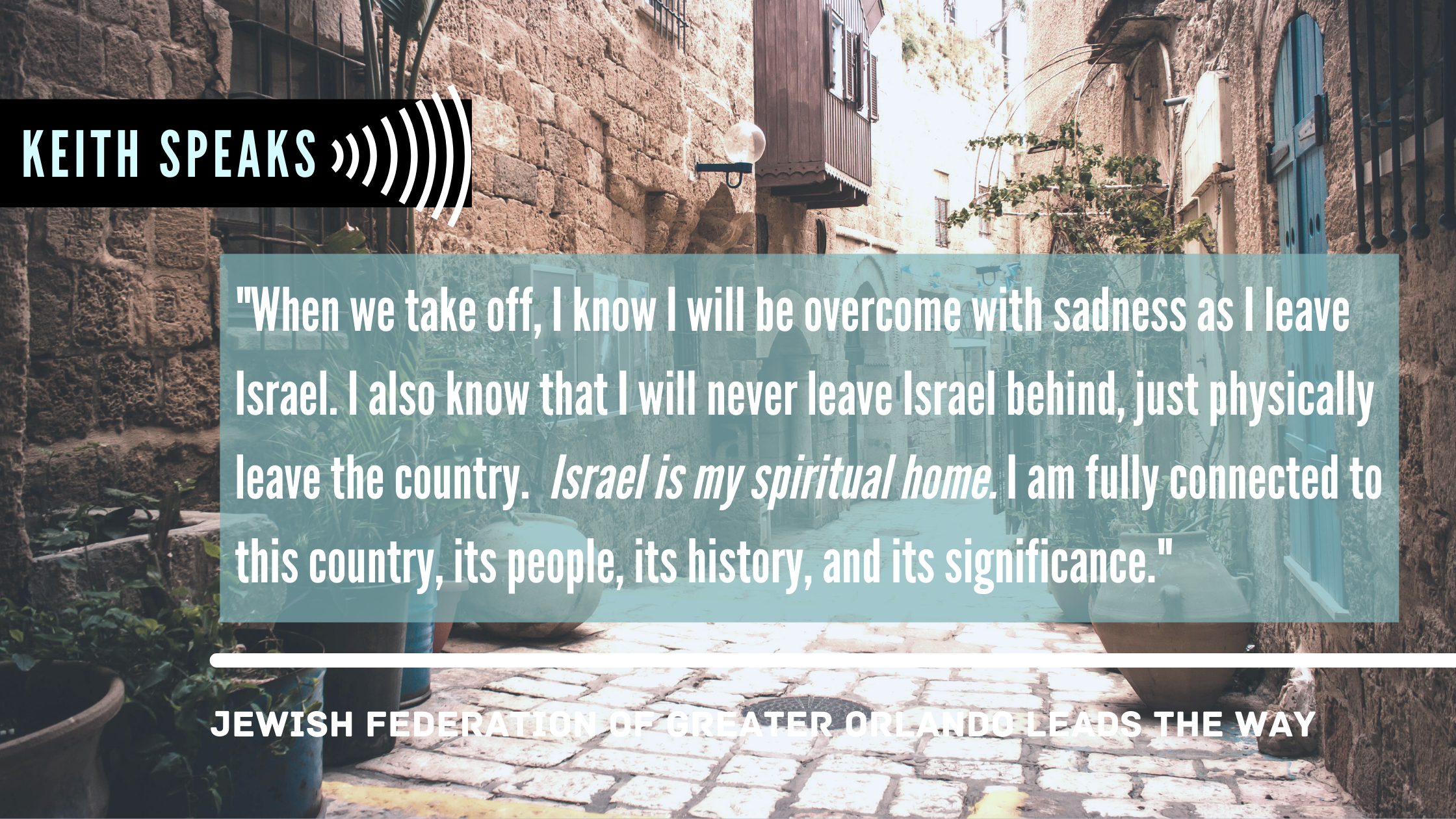 This morning, we visited Hebron, the second holiest city in Judaism.  It’s the place where our matriarchs and patriarchs are buried.  Abraham and Sarah, Isaac and Rebeca, Jacob and Leah (Rachel is buried where she died).  This is also believed to be where Adam and Eve are buried at the entrance to the Garden of Eden.  It’s a place I have always wanted to visit, but never have due to security concerns.  Hebron is a contested area between the Palestinians and Israelis.  Most of the city is controlled by the Palestinian Authority and is in Area A (if you look back in my blog to my Encounter trip you will learn about Area A).  There have been many violent clashes in Hebron.  But it was on my bucket list, and off we went! 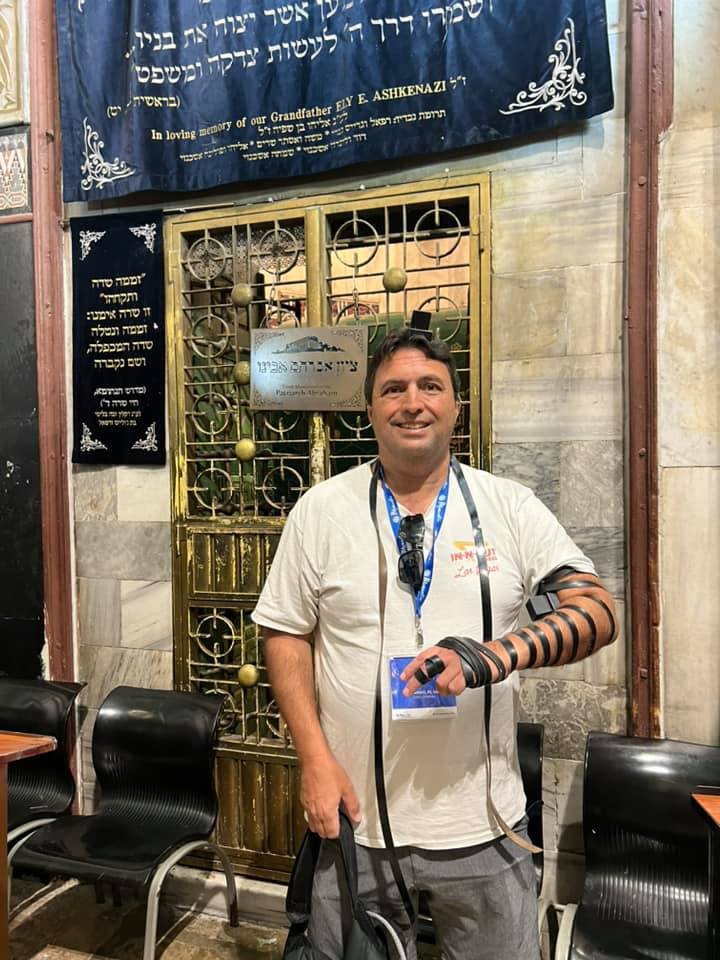 A moment to remember.

It was a beautiful drive and as we pulled into Hebron, I started getting really excited.  Patrick, our tour guide, pointed out the parking lot and told us that was the parking lot for Abraham, where he parked his camels and where he circumcised himself and met the three angels who told him that he and Sarah would have a son.  It was unbelievable to be there.

Patrick told us that the building we were walking into was built by King Herod over 2,000 years ago and amazingly is completely intact.  The floors we will be walking on were the original floors from 2,000 years ago.  The walls were the same.  It is the oldest intact building still used for its original purpose in the world!  I walked up the steps and as I entered the tomb of our matriarchs and patriarchs, I was humbled, and then—THERE, right in front of me was the tomb of Jacob.  It was awe inspiring.  For some reason I thought I would see Abraham’s tomb first, but it was Jacob.  As I walked down the hall, I saw the tomb that contained the head of Esau (it’s an interesting story, but I won’t tell it here).  I turned the corner and there was Abraham’s tomb.  Right across from it was Sarah’s tomb.  I went around the corner and on the other side of Jacob’s tomb was Leah’s tomb.   I would have loved to see the tomb of Isaac and Rebecca, however they are on the other side, close to the mosque.  Unfortunately, Jews are only allowed to go there 10 days a year.  Amazingly, one of them is next Shabbat (Saturday) when we tell the story of Sarah’s death.   We learned that there is a huge celebration with more than 30,000 people attending.  And the entire area is open to Jews so you can visit Isaac and Rebecca’s tombs.

After spending some time at each tomb, totally awed by being in this location, I put on tefillin, and we davened Shacharit (the morning service).  I am not the most religious person, but to do this in this location was powerful.  It was a total connection to more than 3,000 years of Jewish life, and a very spiritual experience.  When we concluded, we went into the room that has Abraham’s tomb on one side and Sarah’s on the other.  Harry Rothenberg, quite possibly the best Jewish educator I have ever encountered, led us in a session about Abraham and Sarah’s relationship using the story of the angel telling Abraham they would have a son and Sarah laughing.  It ended as a love story, made all the more beautiful by us being there with Abraham on one side and Sarah on the other.  Again, I was completely awed and blown away.

Hebron and the tombs of our matriarchs and patriarchs are usually packed and busy.

For some reason this morning, it was totally empty.  And by totally empty, I mean we were the ONLY people there.  We had the whole place to ourselves.  This made it even more special as I had the time to really connect without interruptions and without any noise from other groups.  Without a doubt, this was one of the most spiritual experiences I have ever had. 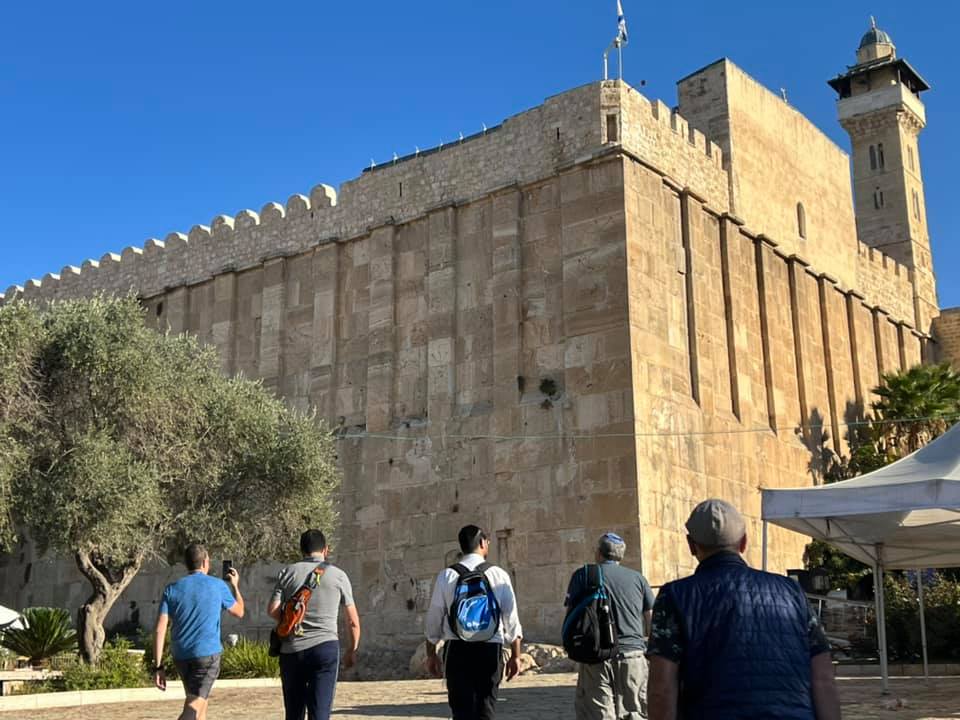 The Tomb of the Patriarchs and Matriarchs.

As we left through security, we passed a line of Israeli students waiting to get in.  A second bus of students pulled up and began to unload.  As we watched, a third bus arrived.  Maybe it was just a coincidence, but I choose to believe it was a gift from God, giving us this special time.

We headed down the road to the neighborhood of Avraham Aveinu (Abraham our Father).  This is one of three neighborhoods in Hebron home to the approximately 800 Jews here.  We toured the 500-year-old synagogue and then went to the rabbi’s home.  We listened with interest as he shared their mission in Hebron—to take care of the spiritual needs of the soldiers who are stationed there.  It is a three-month rotation and can be very difficult.  He told us we were the first visitors he’d had in 18 months because of COVID!  He also showed us a video of what next Shabbat will look like, and it was AWESOME.  Think of a music festival, but in Hebron and because of the anniversary of Sarah’s death.  Then it was time to leave, so we grabbed some pizza for the ride back to Jerusalem, and off we went.

What an incredible morning.  I am still filled with awe at having been so close to the tombs of our matriarchs and patriarchs.  To be in the place where it’s believed that Adam and Eve are buried.  I still get chills now, hours later when I think of it.

Today is our last day in Israel, so we had a few hours of wrap up work to do.  Evaluations of the program, a few talks to us by Charlie Harari and Ari Shabat, and then it was time to head to the final banquet.

The final banquet was amazing.

We were out on a huge balcony, surrounded by dinner stations filled with amazing food.  Each station was better than the next.  There was an open bar with beer, wine, and sodas.  The temperature was perfect, the sun was still out, and we had a great view of the Old City of Jerusalem.  It was so amazing.  After about an hour, we went into the banquet hall and the Orlando group sat together.  There were amazing Israeli salads and pita on the table, and then they brought out our dinner, an amazing steak and chicken dinner.  After we ate, the dancing began, and the room was filled with ruach (spirit).  It was incredibly cool.  And then it got cooler.

Into the room walked Ambassador David Friedman!  When the speeches started, he was the keynote and he gave an inspiring talk about Israel and the Jewish people, downplaying his role in moving the embassy to Jerusalem and with the Abraham Accords.  When he finished to a standing ovation and returned to his seat, he was mobbed by people wanting to talk to him, shake his hand, and take a picture.  I waited until it slowed down and went over myself.  He could not have been nicer.  It was amazing to have him join us.

As we wrapped up the banquet, Charlie Harari gave us a charge to continue doing something a little more Jewish than what we had before.  He led us in one of the most spirited and meaningful versions of Am Yisrael Chai that I have ever heard, let alone been a part of.  It was incredible and very moving.  We began to say our goodbyes, and there were lots of hugs and plans to get together with those from L.A., Atlanta, and Long Island.  We boarded the bus and headed to the airport.

I’m sitting at our gate now, about to board the plane, and am in awe.  This has been an incredible week.  As usual, I hate leaving Israel.  I miss my family and have an entire life in Orlando…but there is something so special and unique about Israel that I always hate to leave.  Sitting in the Tel Aviv airport waiting to board the flight home is always so depressing for me.

When we take off, I know I will be overcome with sadness as I leave Israel.  I also know that I will never leave Israel behind, just physically leave the country.  Israel is my spiritual home.  I am fully connected to this country, its people, its history, and its significance.

As I finish this trip, my wish to all of you is that you come here and begin to experience it yourself.  That connection comes quickly and is very powerful, and is one of the best feelings you will have.