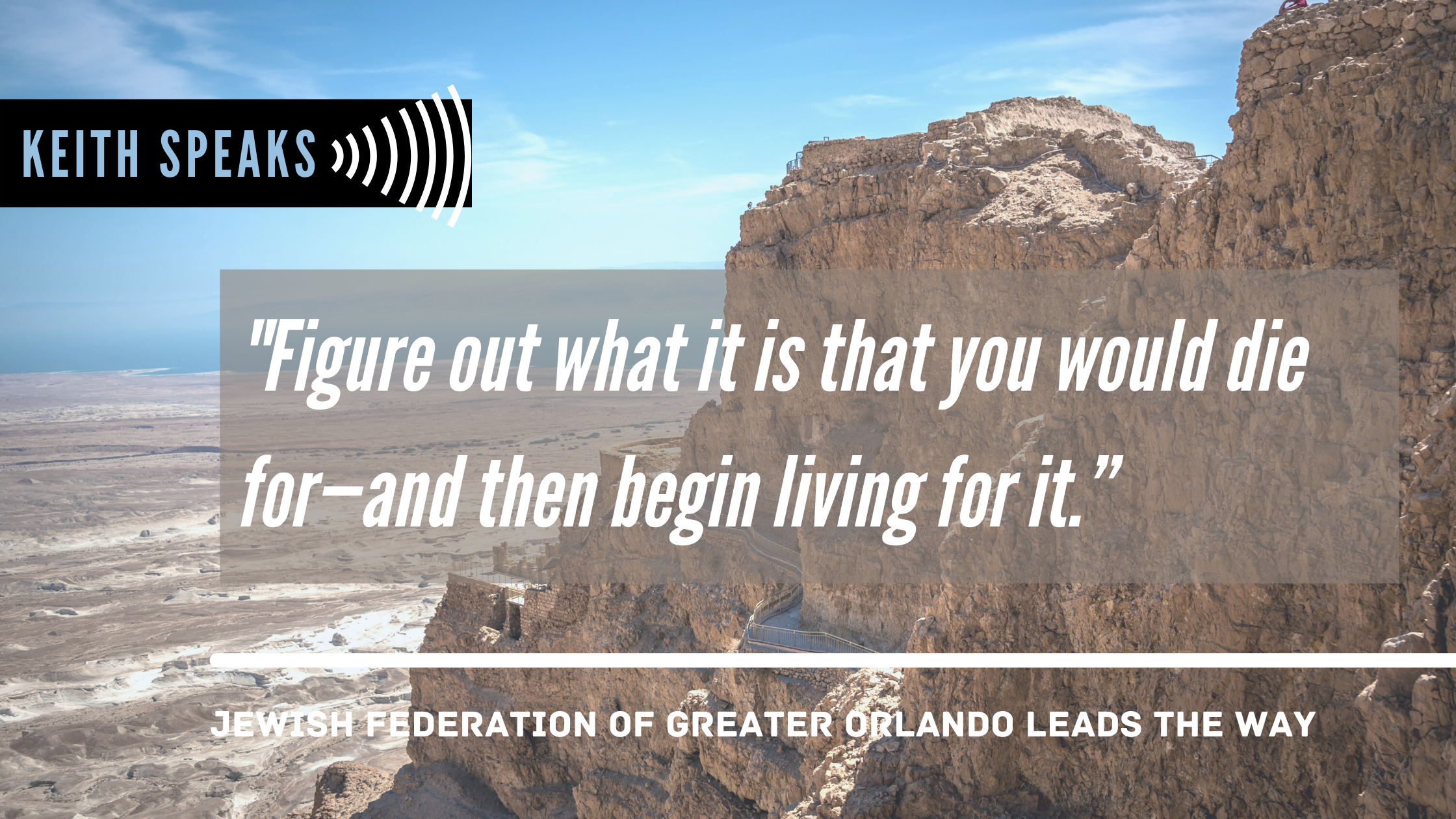 I had to set my alarm for 5 a.m. because we were leaving Jerusalem at the crack of dawn to travel to Masada and the Dead Sea. I’ve been to both about a dozen or so times, and they are both very cool and fun to explore. The only thing that stinks is the super early morning wake-up. We drove south through the desert, and it wasn’t long before we were below sea level. Bedouin encampments dotted the landscape, and the desert had this beautiful, mysterious look to it. When I got the first glimpse of the Dead Sea, I was captivated, as I always am. It’s very big, it’s a stunning aquamarine, and it’s bordered by the most picturesque mountains. It’s truly breathtaking. As we approached Masada, the mountains began to dominate the area. It’s a beautiful drive. 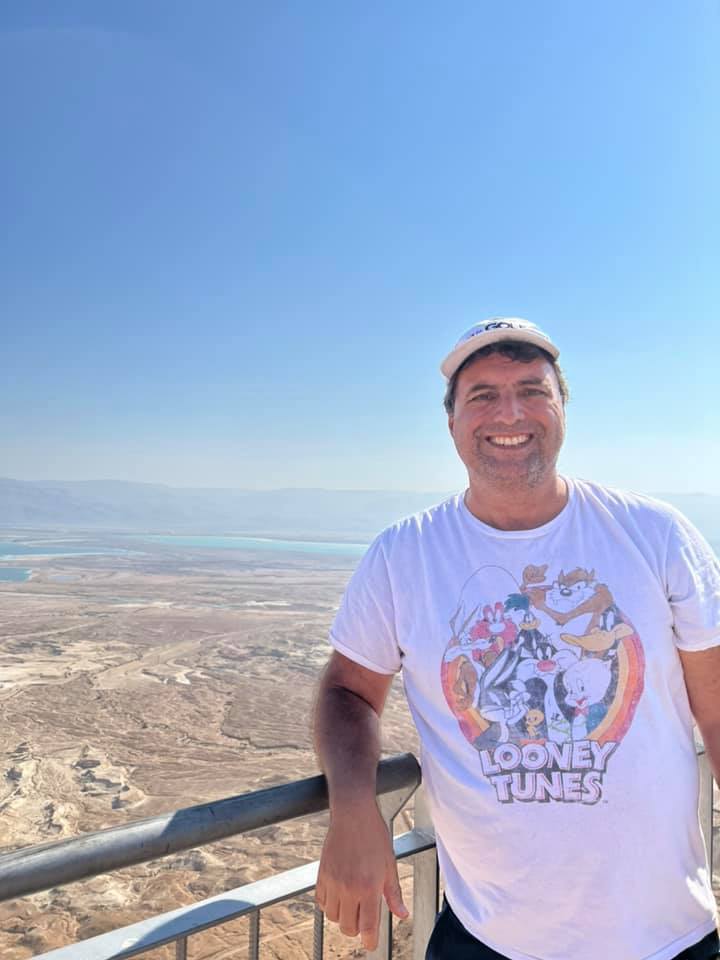 We got off the bus and went into the Masada welcome center. I usually walk up either the snake path or the Roman path (although it’s been well over a decade since I walked up the snake path), but this time I took the cable car. After a long flight and longer days, I opted to get to the top the easy way. One member of our Orlando group decided to run to the top. This is his first time visiting Israel, and he wanted the challenge. From the cable car, I could see him way ahead of the group, gradually nearing the top. As it turns out, he reached the top of Masada and all the way to the north palace in under 19 minutes! We were all in awe.

As we gathered at the top of Masada, there was another group there. They were a pre-army preparation group, and it was fun to talk with them. There is no question how important military service is in Israel and what a key part of Israeli identity it is.

We began our tour of Masada by celebrating b’nai mitzvah for men on the trip who hadn’t had one. It was so exciting and filled with joy and ruach (spirit). We sang and celebrated them. In the ancient synagogue atop Masada, there is a sofer (scribe) writing a Sefer Torah. We had the opportunity to go in and ‘write’ a word in the Torah by touching his arm as he wrote the word and saying a blessing. It was an honor to get to write a word in a new Torah that will go somewhere in Israel. 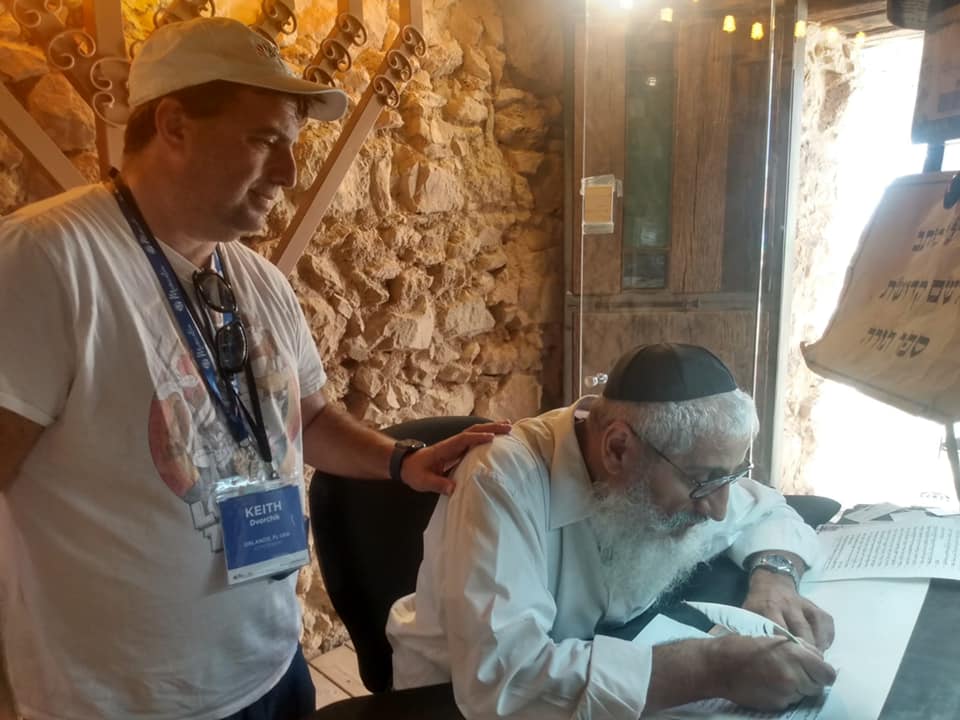 Writing a word of Torah.

After the b’nai mitzvah, we began our tour of the mountain.

Having done this many times, I know the story and wasn’t totally invested. But then our tour guide did something amazing—he began sharing historical information I had never heard before, about Herod the Great, the Roman Empire, and placed Masada firmly in that context. He explained everything that happened to get to the point where the Jews of Masada found themselves besieged by the Romans. It was fascinating.

As we wrapped up, our guide shared some words of wisdom that his rabbi shared with him, which applied to both Masada and our lives today: “Figure out what it is that you would die for—and then begin living for it.” Such simple yet profound words, and certainly something to aspire to. I know this is one lesson I will be taking home with me. 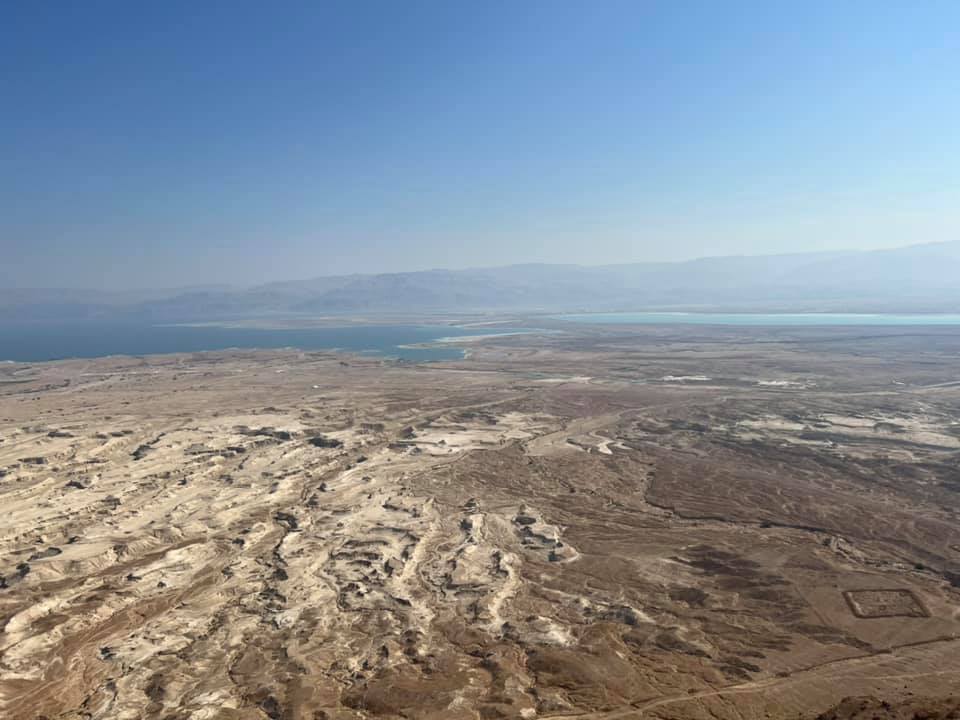 The view from Masada.

After descending in the cable car, we had a quick lunch and then made our way to the Dead Sea. The area we were in was a private men’s section. It was filled with amazing salt crystals that were like rocks. I was grateful that I had my water shoes to protect my feet. We loaded up on Dead Sea mud and spread it all over ourselves to get the healing power of its minerals. And then it was into the Dead Sea!

The Dead Sea is hard to truly explain.

It’s approximately 35% salt content. (The ocean is approximately 3%.) You feel every cut on your body when you first enter the water, and it doesn’t take long for the buoyancy to kick in, and all of a sudden you’re floating. It’s a very cool feeling, as your body is mostly out of the water and you aren’t doing anything to make that happen. You float, talk with others, and relax. After about 45 minutes in the Dead Sea, it was time to get out, change clothes, and move on.

This time we did something different: we played laser tag on the actual battlefield. The guns we used looked and felt like real rifles, and we split into two teams with different objectives that were related to the Battle of Ammunition Hill. Our team lost the first exercise and then won the second one. In the final team exercise, we lost. Each exercise was very challenging and helped us understand just a little bit of what the paratroopers faced. We then went into the Bruce K. Gould Auditorium (named for our very own Bruce Gould!) where we heard from Alon Wald, the Head of Operations. Alon’s father was one of the paratroopers who was killed during the Battle of Ammunition Hill. It was a powerful and inspiring talk.

We headed back to the hotel for a quick shower, and then it was off to dinner. We walked to the Old Train Station, which is now a hip area with restaurants, bars, coffee shops, and live entertainment. I’ve been there before, but not at night when it was alive like this. There was a real energy in the air, and it really felt like pre-COVID times. It put a smile on my face and in my heart. Dinner was delicious. We ordered a bunch of different appetizers, and our entrees were fantastic. It was a wonderful dinner with great conversation.

The rest of the Orlando crew went off to visit the Mir Yeshiva, the largest yeshiva in the world with over 8,000 students while I went back to the hotel, completely exhausted after three very long and very intense days.

Tomorrow will be Shabbat, and I’m excited to be here in Jerusalem and to visit the Kotel for Shabbat. It’s something truly special, and I’m excited to share it with the men on this trip. We are forming amazing bonds while doing personal exploration, and really opening up with each other and the larger group. It’s an incredible thing to be a part of and to watch happening day by day.