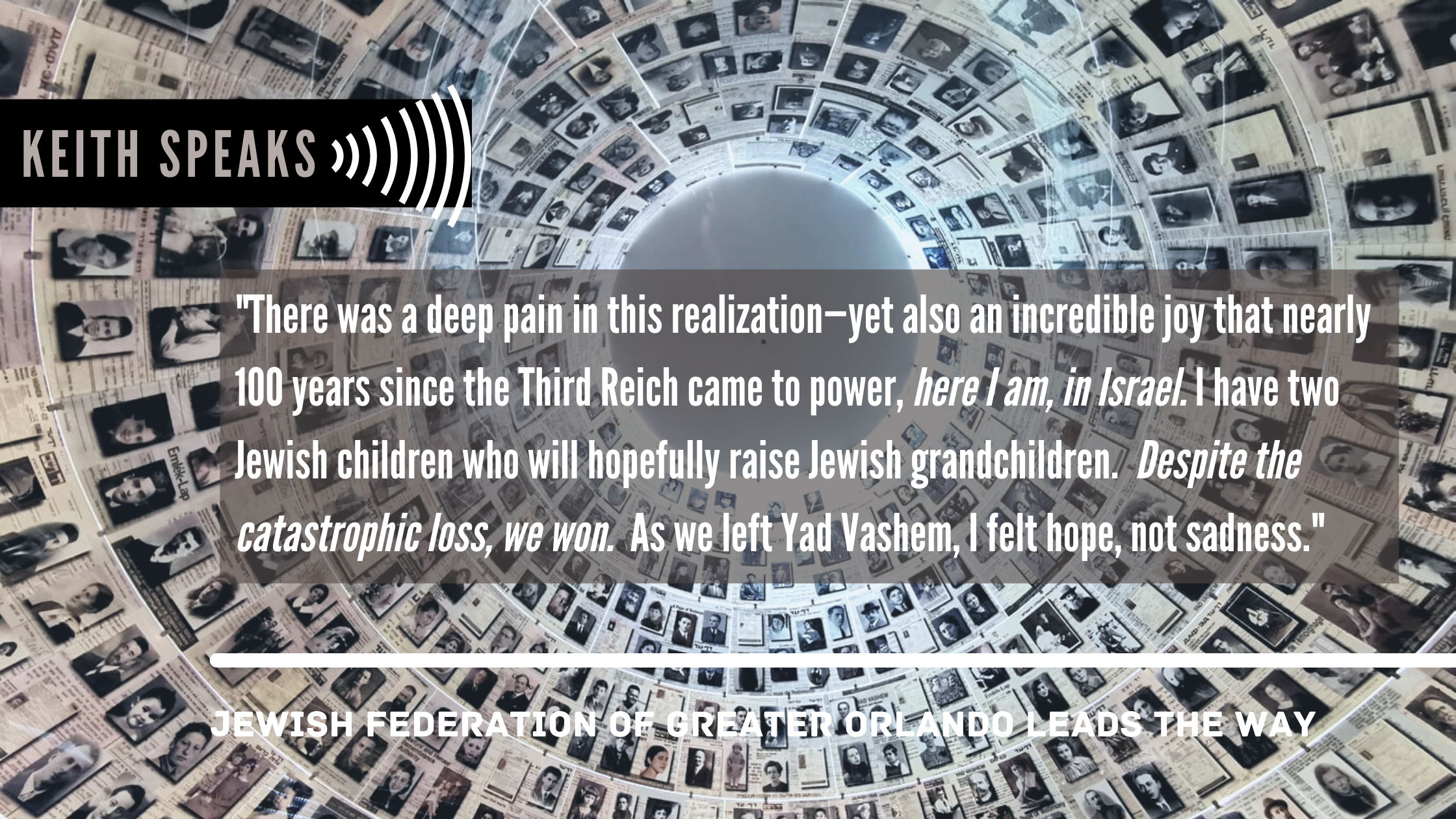 Every day that starts with an Israeli breakfast is a good one.  Today was no exception.  Amazing food, good company, and your choice of caffeine from the espresso machine.  Then it was off to Yad Vashem.

The Orlando contingent in Jerusalem.

I have been to Yad Vashem many times—at least a dozen, and likely more.  I’ve seen it, felt it…and to be perfectly honest, I am no longer truly excited to go.

This time began differently, which had a major impact on my perspective.  First, Patrick, our own guide, gave us the tour, rather than a dedicated Yad Vashem tour guide.  Second, our first stop was the children’s memorial, instead of finishing there.  Third, a discussion beforehand reframed Yad Vashem for me.  I’d always seen it as a depressing reminder of the Shoah.  I was sad in the beginning watching the home videos of Jews who likely all died at the hands of the Nazis.  Then I grew angry as the buildup to the Final Solution was shown, then depressed at the loss of life, and finally inspired by the view at the end which provides hope.   It’s an emotional roller coaster.

Yad Vashem was empty when we walked in.  I’m used to bustling tourist crowds—being pushed to move forward by other groups—missing things because I can’t see around the masses.  This time, it was only us and one older couple (the impact of COVID on tourism).  It was depressing, but also incredibly refreshing and inspiring.  We stayed in the main entry for a while, and I watched the home videos with more focus than ever before.  They were filled with the most beautiful footage of families, young and old.  Despite my deep sadness, I smiled.  And then the schoolchildren video singing Hatikvah came on, and my heart broke once again.  That video always hurts my heart.  These beautiful children, so filled with live and future, singing such a beautiful song of hope, who were all murdered by the Nazis.  It was more haunting than ever before.

As we made our way through the halls, it all looked different to me.  I don’t know if it’s getting older, or the ways my life has changed since my last visit, or even Patrick’s new framing.  I really paid attention to each picture and truly saw the people in it.  And in the blink of an eye, the people in those pictures became my family, the loved ones at my wedding, my children.  I realized as I looked at the dates that we are coming up on 100 years since the beginning of the Shoah.  I no longer saw myself as the young person who would be forced to work or be part of the resistance.  I was now the old person who would have been murdered right away.  My children would be the resistance.  My grandchildren would be the ones in the children’s memorial.  It was surreal to see things that way—and very powerful.

There was a deep pain in this realization—yet also an incredible joy that nearly 100 years since the Third Reich came to power, here I am, in Israel.  I have two Jewish children who will hopefully raise Jewish grandchildren.  Despite the catastrophic loss, we won.  As we left Yad Vashem, I felt hope, not sadness.

Next, we walked to Har Herzl, the Israeli Jerusalem military cemetery.  It is always very moving for me to be there.  I make it a point to stop at Golda Meier’s grave every visit and say a little thank you.  I pay tribute to the leaders who are there for the sacrifices they made for the State of Israel.  This was the first time I saw Simon Peres’s grave.  He is the only one of them that I actually met in person.  I stopped to say hello along with my thank you.  We strolled through the cemetery looking at graves, reading names and ages.  So many of the solders buried there are so young.  We climbed to the top to pay tribute to Theodore Herzl, the founder of Zionism, who believed that Jews needed their own sovereign state and began the process that resulted in the creation of the State of Israel.   Visiting Har Herzl always fills me with gratitude and awe, and this time was no different.

Our day was only half over at this point—and it was already a full day!  Our next stop was the Old City of Jerusalem.

We toured the Jewish quarter, got lunch, and then headed to the Aish HaTorah building where we got to view the Old City from their rooftop deck.  It’s something I’d never done before and I was awestruck by the view.  It was simply beautiful and inspiring.  After lots of pictures, we went to the Kirk Douglas theater (yes, named for that Kirk Douglas), where Charlie Harary spoke to us.  Charlie is very inspiring and spoke to us about our relationship with God and how it’s really a father-child relationship, not a king-subject relation.  It is, after all, Aveinu Malkenu (Our FATHER, our King), not just our King.  He urged us to go to the Kotel (the Western Wall) and simply speak openly with God, our Father, and not worry about saying the wrong thing.

Having been to the Kotel many, many times, I have my rituals.  Charlie’s words changed them.  Instead, I followed his suggestion.  Like at Yad Vashem, the Kotel was empty.  I’m used to it being full, waiting for a spot to get close, and encountering beggars.  Today, I walked right up.  As usual, I placed my forehead against the Kotel and began to speak to God.  While I won’t share my prayers with you, it was very deep and very meaningful.  I was fully focused for the first time ever and blocked everything out.  I don’t know how long I stayed there but when I was done, I began to pay attention to the service happening next to me.    I listened for a bit and then left.  On my way out, I put on tefillin, as I do at the Kotel—and I felt the connection. 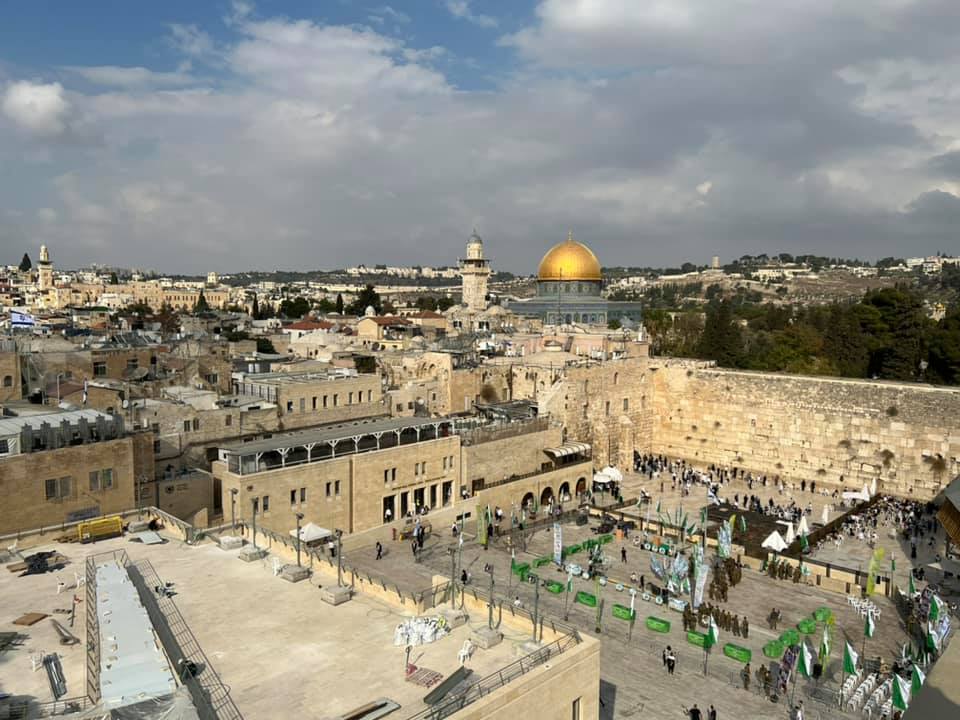 View of the Kotel and Temple Mount.

We had two hours to spend before our tour of the tunnels beneath the Western Wall, so I texted my family to ask about gifts.  My youngest, Matthew, told me what he wanted, so off I went with a friend from Orlando to shop at my favorite store, Mira.  When we got there, it was closed, so we walked on and into the Arab shuk.

There are many perceptions about Jews and Arabs and how they get along.  Most are very wrong.

As we walked in the Arab shuk, we saw friendly faces and kind people.  I found a store that had what I was looking for and began to shop.  The storekeeper was kind and showed me lots of options.  I texted Matthew pictures to figure out the right one.  While we waited on responses from him, my new shopkeeper friend offered me Turkish coffee, which I accepted.  We chose the right gift, drank some delicious Turkish coffee, and negotiated a price.  He asked what else we wanted, and my friend from Orlando needed specific gifts for his kids.  Our new shopkeeper friend knew just where to go, and after previously unsuccessful searches, my friend got what he needed.  As we walked out, our new friend invited us to stop by again for coffee if we returned to the area.  Of course, we said yes.  I very much look forward to it.  On our way back to the Kotel, I got hooked into another shop in the Arab shuk, and ended up buying something else I wanted for myself.

We hustled back to the Kotel to meet the group and ran into another shopkeeper, who I had promised earlier that I’d look in his store.  Charlie had reminded us during his talk about the power of words and when you say something, you need to mean it, so I shopped in his store as promised.  While there was nothing of interest to buy (and I did try to find something), I felt good that I had honored my word.

We got back to the Kotel in plenty of time and watched the beginning of an IDF induction ceremony.  It was amazing to see the joy in the eyes of children and their parents, grandparents, aunts, and uncles.  One family struck me deeply as I watched the interaction between first mother and son, then father and son.  It brought tears to my eyes.  Then we went into the tunnels beneath the Kotel.  It’s a fascinating tour that I did about 15 years ago.  There is a synagogue built below to get closer to where the ‘Holy of Holies’ (the ark of the covenant) was kept.  We saw the Herodian stone in better condition there, and realized just how high the wall really was and is.  We went to the place that is the closest we can get to where the ‘Holy of Holies’ was kept and had another chance to speak to God.  It’s something I encourage you to do when you visit. 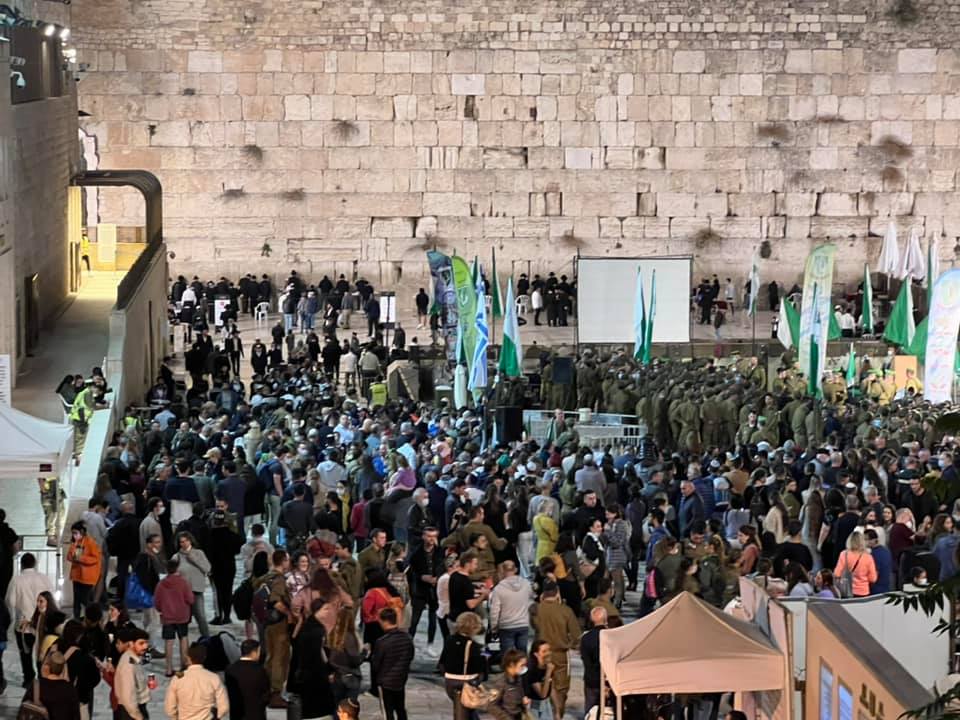 IDF induction ceremony at the Kotel.

We were now an hour late for our dinner reservations.  Once we arrived, we enjoyed a delicious dinner at a Kosher-Asian fusion restaurant.  We had an amazing conversation—that surprisingly included engaging Torah study!  Many people think of that as incredibly boring.  I can tell you from first-hand knowledge, when you have a good teacher, it’s really fun and very cool.  It was a very fulfilling end to a very long and exhausting day.  We didn’t know how long the walk back to our hotel was going to be, and laughed when we realized it was literally right next door!  We walked in behind another group of people, which meant the elevators were not an option (Israeli hotel elevators fit 2-3 people max!) so up six flights of stairs it was.

As I lay in bed preparing for an early morning and visits to Masada and the Dead Sea, I am overwhelmed with gratitude.  The connections I’m building with the Orlando men are amazing – it’s hard to believe it’s only been three days.  The deep questioning I expected to do on this trip is happening, and I’m enjoying the process.  It’s truly an amazing place that provides far more questions than answers, while also providing deep meaning and connection.