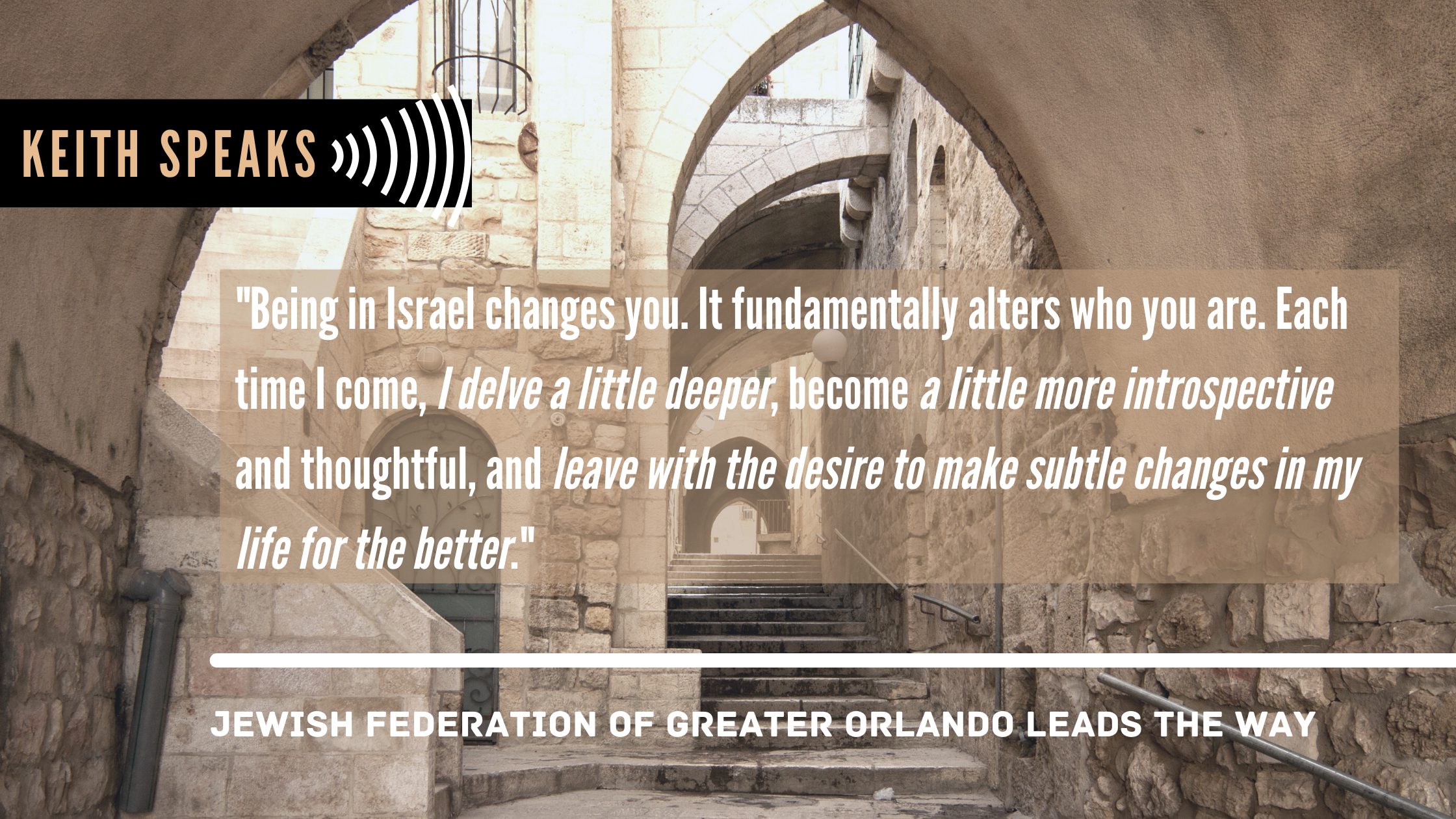 Anyone who has experience traveling understands the impact of jet lag.  Having been to Israel many times, I knew it was crucial to stay awake as long as I could on Monday night so I could sleep through the night and wake up refreshed.  Mission accomplished! 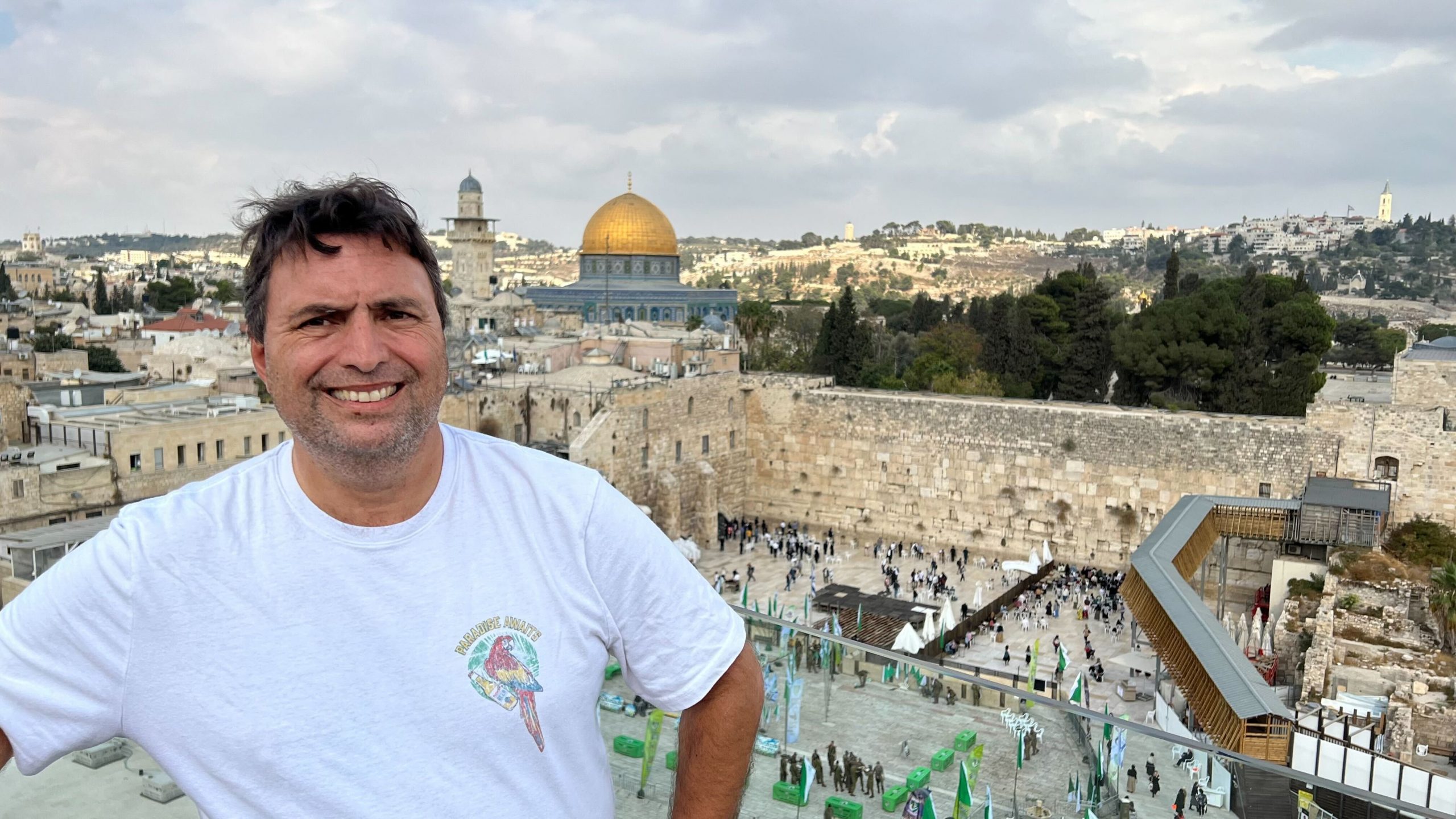 Day 2 began with an Israeli breakfast.  For those who have been to Israel, you know exactly what that means.  For those who have yet to experience such a delight, there’s really no adequate way to describe it.  Mountains of fresh and grilled veggies, salads, eggs, shakshuka, hummus, tahini, pita, rolls, and the cheeses—there is no better breakfast buffet in the world.  Not to mention the coffee and espresso for all your caffeine needs, the lemonade and water and orange drink (not orange juice!)…needless to say, we enjoyed a veritable feast before starting our day.

First on the itinerary was an inspirational talk from our trip leader, Ari Shabat (yes, that’s his real last name).  Ari spoke on how to be AWESOME and live our most AWESOME lives, and then we boarded the bus to Tzfat, thoroughly inspired.  Of course, no stay at Kibbutz Lavi would be complete without the bus getting turned around because someone forgot to return their key.  You see, Kibbutz Lavi still uses real keys—not the plastic, disposable ones that every other hotel uses.  These are real keys on heavy keychains, and the bus couldn’t leave until every last key had been returned.  Once the key issue was solved, we were off—sort of.  We had too much luggage to fit under the bus, so we had to store them in the back of the bus, leaving barely enough seats for everyone.  But we made it work, and off we went! 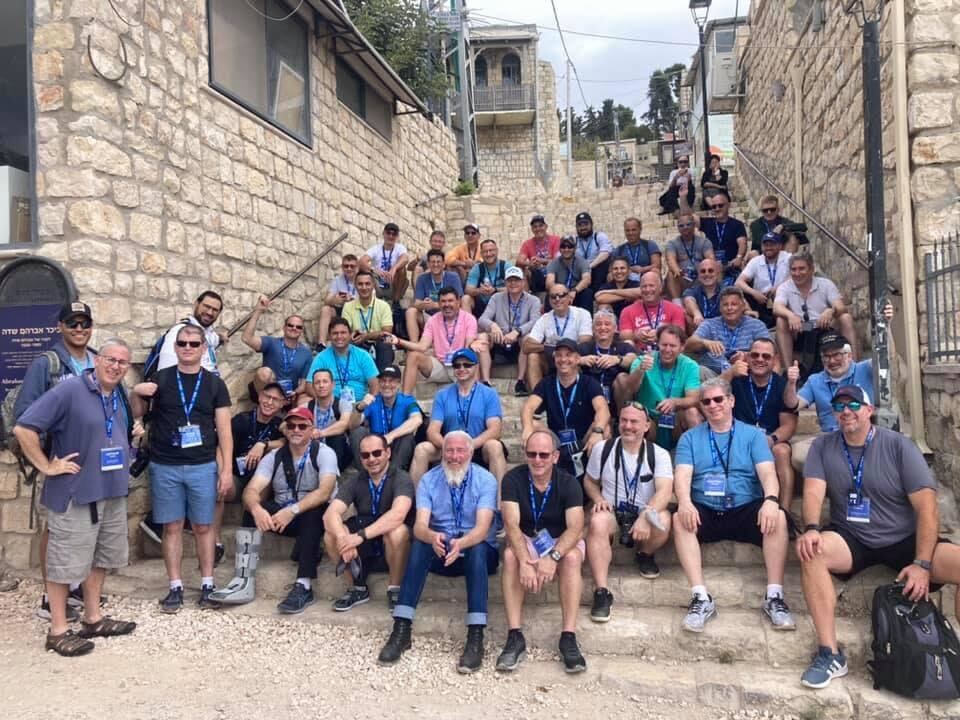 The group in Tzfat.

Tzfat is a mystical city.  It’s the birthplace of Kabbalah, Jewish mysticism.   It’s where Lecha Dodi was written.  The city resides on a mountain; in one day there, you’ll climb more steps than you would on a Stairmaster.  It’s also home to an amazing artist colony.  Can you tell how much I love the city of Tzfat?  Our first stop was Women of the Waters, a women’s mikvah.  Most mikvot are designed for women due to the laws of Niddah, which pertain to menstruation and ritual purity.  Elisheva, our host, was a wealth of information, and I was blown away by the details she taught us.  Soon, Elisheva turned it over to Adrienne Gold, an instructor on the Momentum Women’s Trip.  We were the very first men’s group she had spoken to, and she had much to share.  Before we left, we were afforded an incredible privilege: to tour the women’s mikvah.  Ordinarily, no men are allowed—period—but we had the opportunity to see the mikvah up close and understand what it was all about.

After the women’s mikvah, we descended the mountain on ancient steps leading to the Mikvah of the Ari.  The Ari was a 16th century rabbi in Tzfat, and this was the mikvah he used daily.  For those who don’t know, when you immerse in the mikvah, you immerse naked.  So we all went into the Mikvah of the Ari, took our towels, waited in line, and then dunked ourselves into the fresh, ice cold water.  It was an amazing, refreshing experience, and I could feel the spirituality of it.  There is something special about my first mikvah experience being in the mystical city of Tzfat, and in the very same mikvah the Ari used 500 years ago. 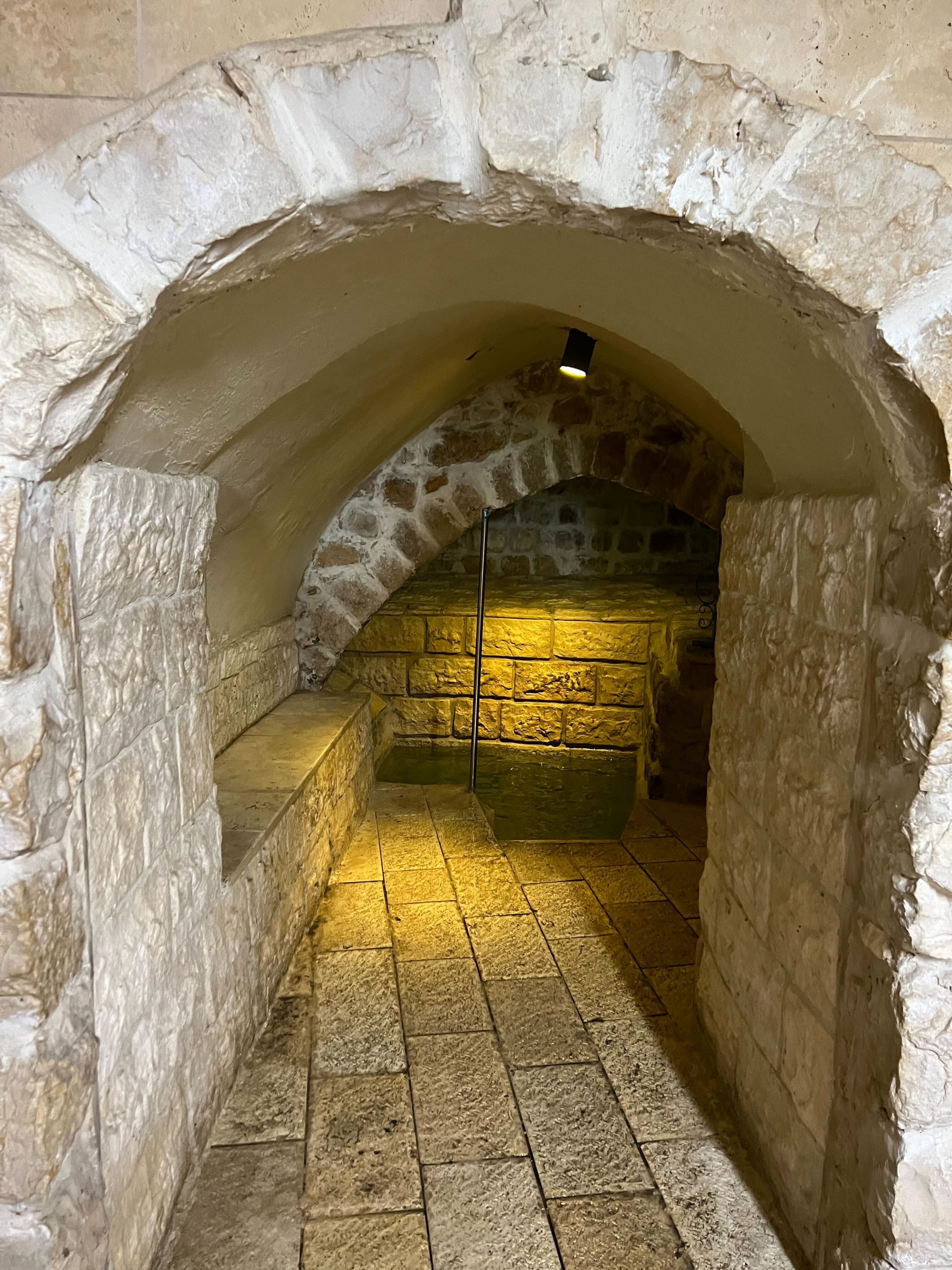 The Mikvah of the Ari.

Then it was back up those ancient stairs, all the way to the top again—an immense workout, to be sure.  Level after level we climbed, until we finally reached the main area filled with shops and synagogues.  The Joseph Caro synagogue was closed, but we did get to visit the synagogue of the Ari.  It’s another one of my favorite places in Tzfat; it never gets old being in that sacred space.

Judaism means MISPACHA, family, and one of the greatest things about Israel is running into people you don’t expect.  There are always people you know to see and visit.  A friend of mine moved to Tzfat in 2003, and we took advantage of our lunch break to get together, catch up, and of course, eat.  He took me to an amazing hummus restaurant—yes, there are restaurants that just serve hummus.  Many of us pronounce it hum-us but in Israel, it’s choom-oos.  We both had the hummus with sabich.  It was some of the most delicious hummus I’ve ever had, and a wonderful time catching up with my friend.

I rejoined the group after lunch, and we headed for the Lebanese border.  Israel is a small country, so it’s easy to go see all the borders.  From high in the mountains by Misgav Am, we looked out upon Lebanon.  It really gives you perspective on just how tiny Israel is, and how significant borders and mountains are in this part of the world.  We didn’t go to the Golan Height, but it’s the same there—the high ground matters to protect villages in the valley.

Next, we drove down into the Hula Valley to stop at the Jordan River.  Where we stopped happens to be the same location I’ve gone rafting down the Jordan on countless Birthright trips.  Memories flooded back, and I couldn’t help but smile.  If you’ve never seen the Jordan River, it’s not the raging, wide river you imagine.  It’s more of a creek—not very deep, and not very wide.  But very important.

Then it was time for dinner.  We dined outside beneath a tent while music played.  It was a beautiful environment to end the day—and once again, the food did not disappoint!  Course one was filled with salads and delicious salmon.  Then the main course: steak, chicken, potatoes, sweet potatoes, and more.  Whenever our table ran out of something, our servers simply brought more.  As dinner ended, the dancing began.  The energy was infectious, and we danced with joy.  It was truly special to be a part of, and again, impossible not to smile.  (Before you ask, there are no pictures of me dancing!)

At last, we embarked on the 3-hour drive to Jerusalem, the City of Gold.  There is nothing like the approach into Jerusalem, even at night. 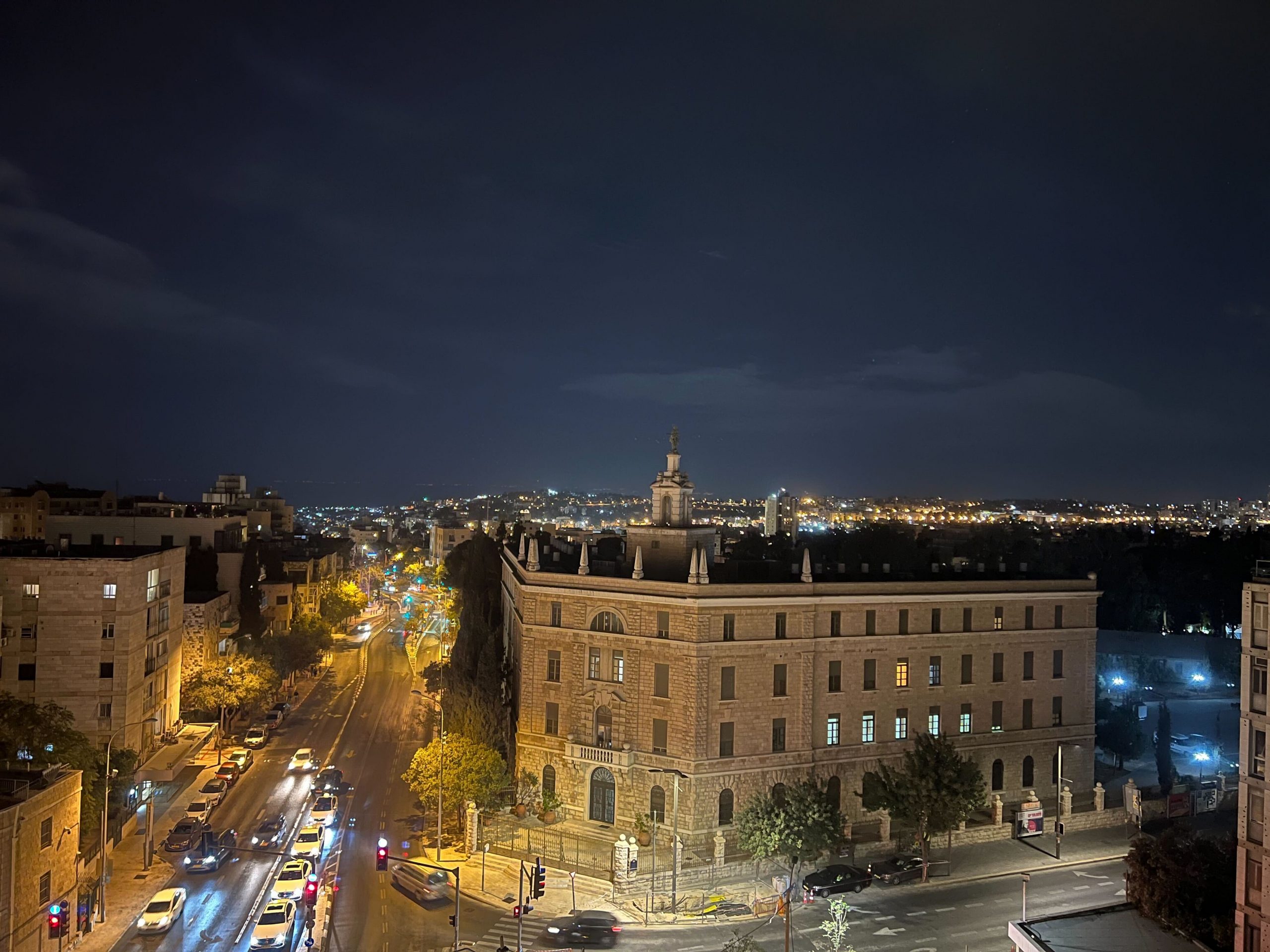 This blog is long, I know—it was an incredibly busy day.  It was also a beautiful day filled with introspection and friendship.  I’ve known most of the men on this trip for less than two days, yet already, we’re having deep discussions and learning with and from each other.

Being in Israel changes you.  It fundamentally alters who you are.  Each time I come, I delve a little deeper, become a little more introspective and thoughtful, and leave with the desire to make subtle changes in my life for the better.

I’m excited to share this journey with you, and hope you will be inspired to come here, as well.  The natural beauty is amazing.  The people are wonderful (and crazy).  The food is unbelievable.  And the nature of the country gets into your soul, your neshama, and begins to impact what you think, how you feel, and how you act.  It’s an incredible gift.